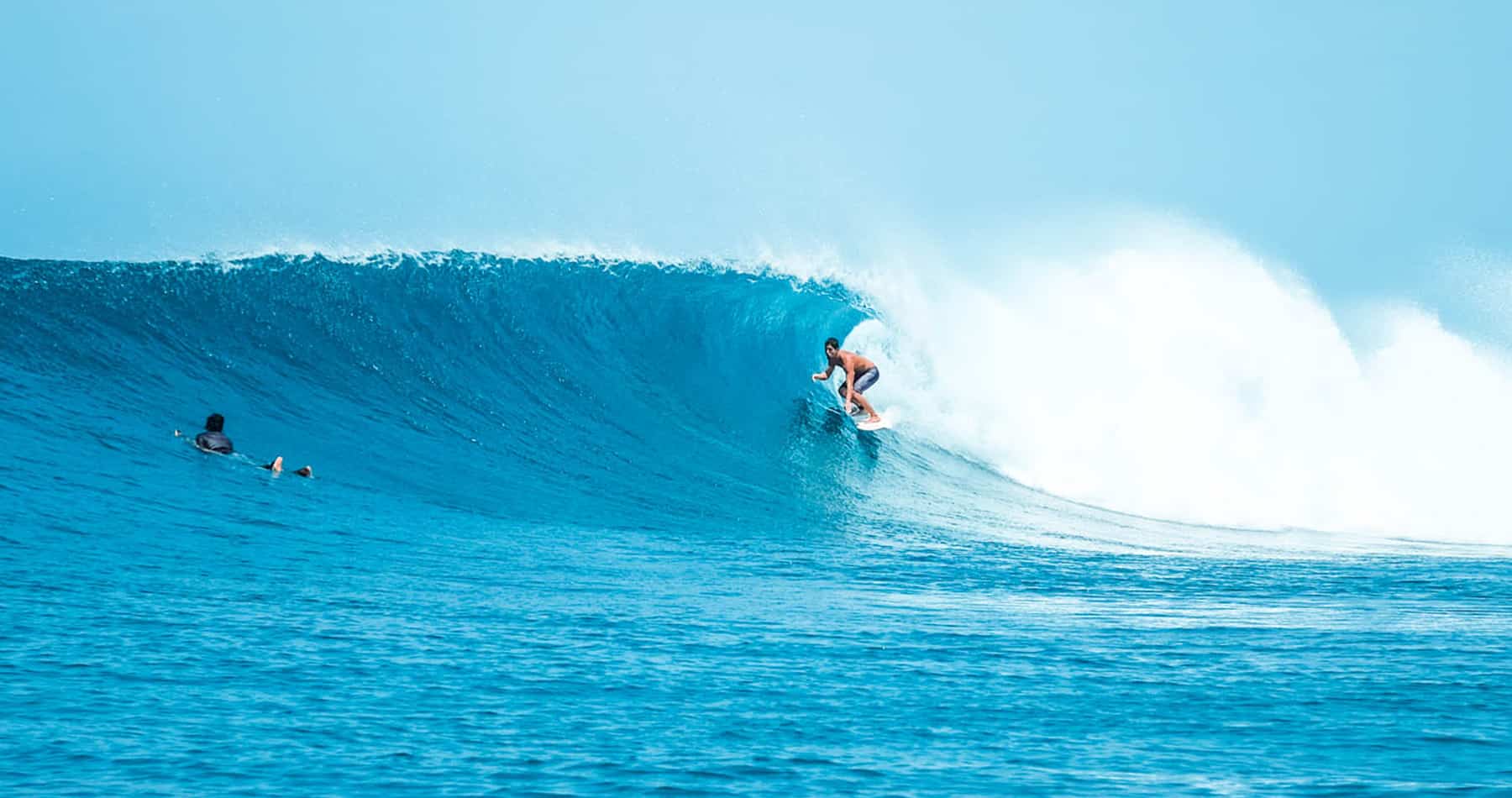 Looking for the best Maldives surf spots? Well these 10 waves in Male Atoll are just a short boat ride from the airport and offer up tropical perfection!

Maldives surf? Ummmm…isn’t it all tranquil lagoons and overwater bungalows?!

While the Maldives combination of tropical sun, warm aqua water and coconut palm-dotted sparkling white sands tend to register as paradise on anyone’s radar you can crank that up another idyllic level again if you happen to be a surfer.

Here, in this little corner of the planet are heaps of reefs and points which serve up rides as good as anywhere in the world. From mellow beginner-friendly breaks to places packed with thumping barrels where only the fearless dare go, the Maldives surf break menu is for of tropical perfection.

Consistency is top-notch in this Indian Ocean heaven too. Surf season here runs from late February to mid-November with an optimum peak of April to October when the southerly swells arrive and flat days are few.

And although there are epic waves to be found all over The Maldives (there are 26 atolls with over 1,000 islands!) time in the water is the name of the game – so here are 10 of the best Maldives surf spots in Male Atoll, all just a short boat ride from the main airport…

Named for the coke factory on Thulusdhoo island where the break is based, Cokes is all about the barrels.

Few would argue that this hard, hollow right-hander rates as one of the entire Maldives brightest surfing gems. And certainly where the North Male Atolls are concerned there is no doubt that it headlines as its main draw.

You might get a longer ride at nearby Chickens but Coke’s location means it is consistently bigger and also easier to get to – just a short paddle off the main island.

Its tucked-in set-up also offers ideal southerly wind protection which can mess with other spots in the area.  Expect a pitching, steep take-off and two sections which both throw out a curling lip. The inside second section where the sharp reef is shallowest provides the longest cover-up.

And on smaller days it can provide a playful face, but still best left to experienced surfers.

So, if you’re looking for size along with hard-hitting hollowness Cokes heads the Male Atoll ‘best of’ list.

Skill level – occasionally OK for intermediates but typically Cokes is one for the experienced and fit, especially on bigger swells

Just across the channel to Thulusdhoo island’s Cokes, left-hander Chickens is another of the atoll’s all-stars and the region’s biggest swell magnet – definitely one of my favourite breaks and I’ve had some epic rides here!

It will handle just about any size the ocean chooses to throw at it and when the swell does amp up this is when you see the break’s sections linking up and handing out rides which can go for 500m! These are the times when you are most likely to hear it being talked about as one of the best waves, not just in the Maldives but on the entire planet.

On smaller swells there are three distinct sections with the last inside section producing some sweet barrels if you’re lucky enough to make it that far.

And in case you’re wondering the break gets its name from the chicken-processing plant on the island rather than passing judgement on those who daren’t take on the challenges of Chickens!

Reserved for the sole use of Cinnamon Dhonveli Resort’s guests and one of the most exclusive Maldives surf resorts, Pasta Point is known for its consistency in dishing up perfectly-shaped left-handers which means you’ll often hear it referred to as a wave machine.

Big or small the waves of Pasta Point are perfectly formed and while other spots around are suffering with the wind conditions this spot just keeps going – making it one of the most famous Maldives surf spots.

Rides here can be long if you have the skill to handle the sections and if you rock up when the swell is big enough. After take-off your first section is the scooped out Macaroni Bowl which spits you into the aptly-named Lockjaws.

This fast end section will only be possible with some size and even then the reef here is shallow and not for the faint-hearted.

I was lucky enough to stay here for a week and honestly it’s one of the most fun waves I’ve ever surfed! The bar overlooking it not only means you’ll score some epic pics from the in-house photographer but you can literally step out of the water and have a cold beer in your hand…perfection!

This stunning right-hander on Himmafushi Island is considered by many to be the fastest wave to be found anywhere in the Maldives and is frequently described as perfection.

Like many of the atoll’s world-class spots Jailbreaks is at its most pristine when the bigger swells rock up because that is when longer rides – 300m or more – are more likely.

The beauty of Jailbreaks is depending on where you take-off it can be a little of whatever you want it to be – from forgiving mellow walls to full-on, fat-lipped barrels.

The most sought-after set-up spot starts you out steep and at high speed from which you can tuck into the first tube section, work your way along a gentler wall and then hit a further two barrelling sections further in.

If you’re looking to surf the Maldives on a budget this is also the best spot to head – with budget Maldives surf camps from just $50USD per night…for two people! Click here for more details.

Right-hander Sultans is beloved by the surf-passionate for several reasons. First it is dubbed ‘user-friendly’ because unlike some of its other Male Atoll counterparts it can be an easier alternative for less experienced surfers or those who want to tuck into a barrel or two without having to work too hard or get back on their game after a spell out of the water.

Secondly, while it of course has its ideal season, swell and winds it pretty much always has something on, even when almost everywhere else doesn’t, so is hard to beat if you are looking for consistency.

In the right conditions and on a bigger swell Sultans is perhaps the longest wave in the entire area. Last of all, it doesn’t end up being quite the human soup that other easily accessed Male Atoll breaks can become. Not because it isn’t popular but because Sultans offers a variety of take-off spots which thins out the crowds.

Outside the wave is mellower while inside things speed up with steeper take-offs and the whole is a series of workable walls with some barrels thrown into the mix. Honkys – just a stone’s throw away – is the fun left-hander half of this Thamburudhoo Island double act.

Ideal wind direction – south-westerly to west with westerlies being optimal

The other half of the Thamburudhoo twin-headliners, left-hander Honkys – like its right-hand counterpart Sultans – is known for its long ride lengths. Also like Sultans, Honkys can be a fun, forgiving wave and therefore popular with all-comers but also has its challenges for those who need a little more.

It’s also a great option for those staying on Himmafushi – just across the channel and the main left hander in the area, so goofy footers rejoice!

The take-off offers a relatively easy start while further down the line things get a bit more interesting with added height and speed at Fred’s Ledge. This is where the wave jacks its lip and allows you to tuck inside for a brief escape from the tropical sun. At low tide things get a little punchier.

Tide – all, heavier on low tide

Formerly and for several years running the venue for the WQS O’Neill Deep Blue event, left-hander Lohis or Lohifushi is another of the Male Atoll’s bright stars. Breaking off Hudhuranfushi Resort, Lohis really comes into its own when the swells are bigger, linking its two sections for almost ridiculously long rides.

What’s more, if you choose to set your line right a huge proportion of your ride can be spent inside the barrel right from take-off where the shape of the reef just keeps everything endlessly spinning. If you prefer the open air continue your charge down the line and have some fun working the walls.

Of course not everything always comes together to make it work here and the wave is typically considered less perfect than its nearby alternatives such as Pasta Point. Also, like Pasta Point it is reserved for resort guests.

The inside section in particular tends to get a bit mushy if the winds aren’t right and is less consistent than the outside. However, if its length you are after you’re likely to get it here and when the surf gods smile you may just luck into the longest barrel of your life.

Gurus is another of those Maldives jewels which offers a little something for everyone and as one of the breaks accessible directly from the shore the spot is a locals’ favourite. Typically

this left-hander is considered one of the easier rides around which means the rusty, the unfit and the improvers can all get to sample a little Maldives perfection without scaring themselves silly or half-killing themselves.

However despite its kinder nature, its lovely walls mean the experienced will have plenty of time for fitting in some flashy manoeuvres and there is enough speed here for pulling off an aerial or two as well.

Consistency here is also good – Gurus location off Guli island angled out into the ocean gives it a decent swell window where it can pick up some things which other spots can’t.

One of the South Male Atolls best breaks and located near the Kandooma Resort, this right-hander gives you a chance of scoring a multitude of barrels without fighting it out with the North Male Atoll crowds when the big swells hit. Hollow and fast, Natives (which also goes by the name of Foxys) tends to be a little smaller than its world-class counterparts a little further north but still has plenty to keep the advanced surfer smiling.

Length of rides is also one of this break’s draws. Rock up here on a sizeable south-east swell and you can expect to stay on the wave for at least 100 metres. Get lucky and you can double that with the chance for some barrels all part of the fun.

Located out front of Kanifinolhu’s Club Med, Ninjas is a playful Maldives wave in which everyone of every skill level gets to join in the fun. The watchword here is mellow and everything is slowed down so that longboarders, beginners and surfers who want a break from charging high-adrenalin kamikaze spots are all found out in the water.

Right-hander Ninjas picks up plenty of swell but the break can’t handle bigger sizes so once it gets beyond about head high things will get messy. However, come here on a smaller swell and you’ll find some great-shaped gentler peelers for decent length rides and fun sessions that won’t leave you exhausted.

Are you on the hunt for some Maldives surf?