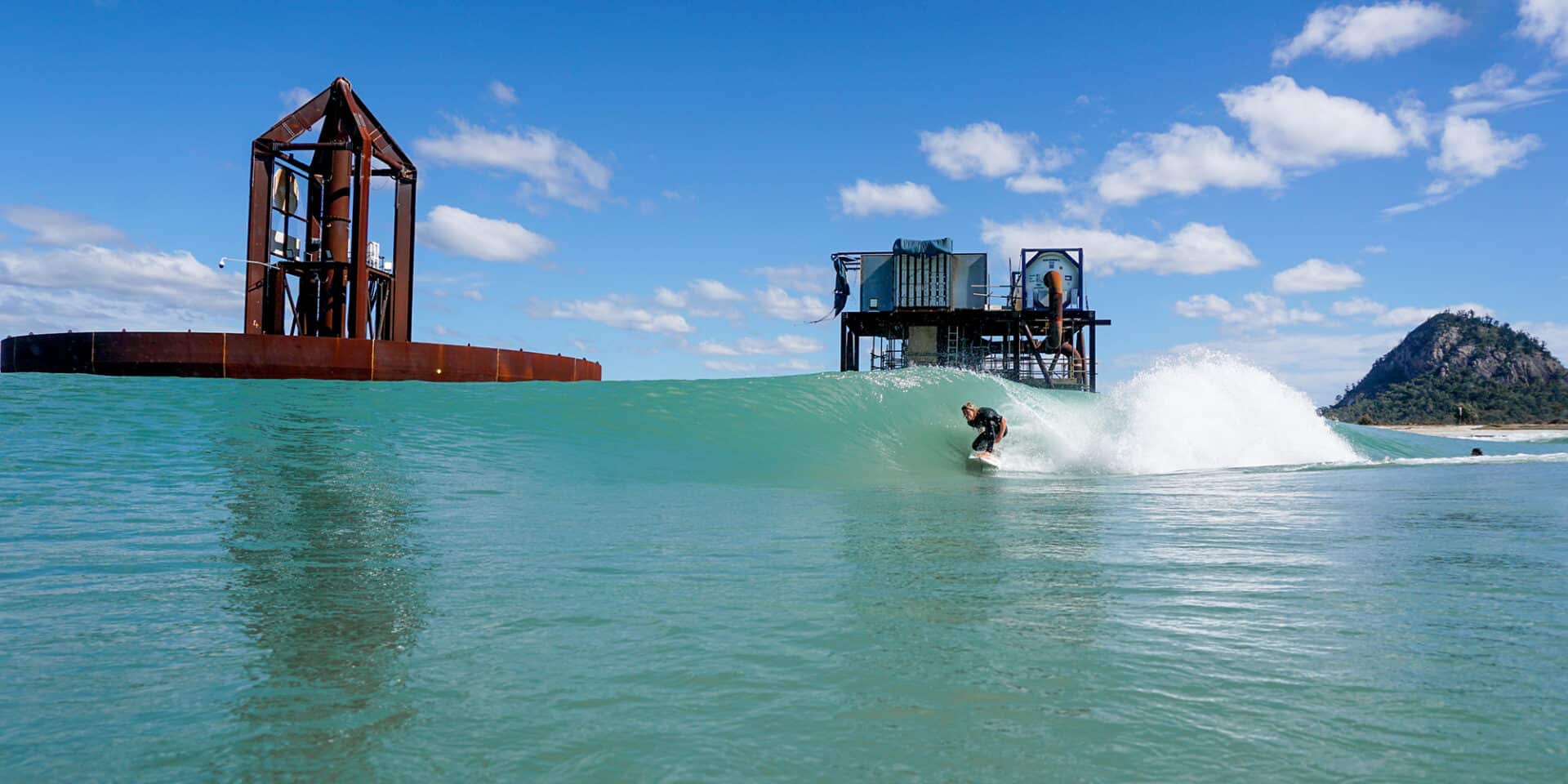 When I got an invite to check out the Surf Lakes Yeppoon Wave Pool on a recent test day I jumped at the chance – so what’s it really like?

When I got an invite to come and check out the Surf Lakes Yeppoon wave pool, I jumped at the chance.

I mean who could turn down waves on tap, surfing alongside former world champion Mark “Occy” Occhilupo and testing out Surf Lakes currently unopened R&D facility in Yeppoon, Queensland?!

After a long 9 hour drive up the coast to central Queensland, I could hardly contain my excitement as the iconic plunger came into view.

So what’s the Surf Lakes experience like and how does it compare to other wave pools?

What is The Yeppoon Wave Pool? 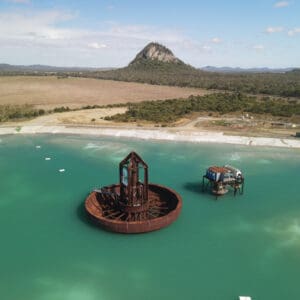 The Yeppoon wave pool is powered by Surf Lakes wave pool technology – and waves are generated by the unmistakeable plunger in the centre of the pool.

Unlike other options like Wave Garden, Surf Lakes generates waves in a circular pattern – allowing multiple surf breaks to be ridden at the same time. This means whilst beginners learn to surf at the beach break, expert surfer can enjoy draining barrels just a short paddle away!

It’s also worth pointing out that currently the Yeppoon wave pool is still a research and development site, so it’s not open to the public.

I was invited to the R&D facility on a recent R&D day, so don’t jump in the car or on a flight to score waves there just yet! 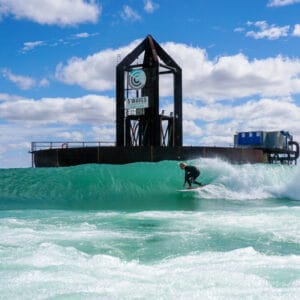 Chances are that you’ve already seen the epic promo video for surf lakes entitled “Pumped” which had surfers around the world frothing at the thought of slab like pits and whackable walls all simultaneously in the same location.

When I was at their R&D facility they were currently running at 2.8 stroke, which was producing a super fun shoulder to head high wave at Occys Peak, and still some chunky barrels at The Island.

To put this into perspective, the full capacity of the Yeppoon Wave Pool is 6 stroke, so more than double the size, and the Pumped video was only just over 4 stroke!

The potential of the wave pool is pretty epic, and even at 2.8 stroke I had heaps of fun.

This is where things get really interesting and Surf Lakes really comes into it’s own. Due to the 360 degrees of “swell” that are produced by the plunger mechanism, Surf Lakes can easily have 5 wave options all running at the same time. 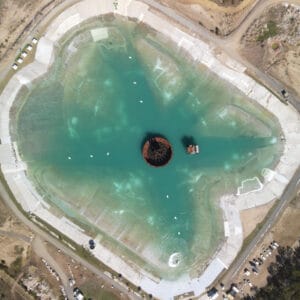 The R&D facility is currently running the following setup:

There are also 2 other waves which are currently being tweaked, but weren’t accessible during my trip

Having chatted with head engineer Kit (who I joined in the water at The Island whilst he was on a well deserved break!) the possibilities of Surf Lakes are only limited by what the developers want to achieve.

You could change the shape of the lake to accomodate a long, reeling point break that mirrors the likes of The Pass in Australia or Raglan in New Zealand, you could swap out Occys Peak for a wave designed specifically for airs, or you could even have every option running as a beginner beach break.

The swells there, and you cna in theory adapt it to produce any wave you can imagine!

So this is the big question – what are the waves like to surf and how’s the in water experience. 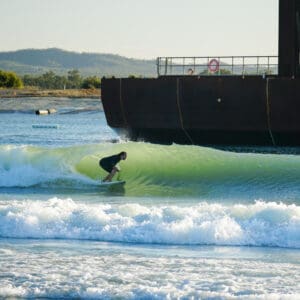 The R&D facility was only pumping out 2 wave sets every 10 minutes during the test day, but at commercial capacity Surf Lakes can generate 2,000 rideable waves an hour across all the breaks.

In surfing terms that means 4 waves sets, with about a minute between sets, and surfers will be able to paddle into at least 12 waves an hour.

For me the surf experience at the Yeppoon wave pool was much more on par with the ocean than other wave pools I’ve surfed.

Sure the imposing plunger is very Mad Max-esque, but the way the swell rolls in and how you move around in the lineup is much more familiar.

The waves themselves have a good punch behind them and are pretty quick (even at the R&D size!) but overall, they’re super fun. The full size options apparently run for longer and slow down slightly, allowing you to set up for bigger turns and cover ups, even still, I managed a few cheeky shampoo cover ups on the left hander. 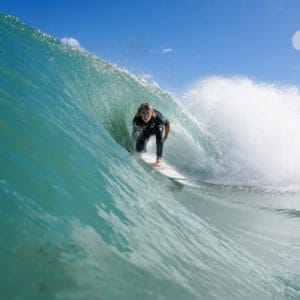 When it comes to barrels Surf Lakes boasts the biggest wave potential of all the currently options out there.

Even at 50% size The Island was a shallow, powerful barrel that you had to backdoor to make the most of it, and even though Occy made it look easy, he still took the occasional beat down whilst I was in the water photographing!

I managed a few cheeky cover ups on Occys Left during my time in the water, but unfortunately the full barrel potential of Occys Peak would need the power to be cranked up a bit.

But as Pumped clearly shows – when it’s working, Surf Lakes will have some of the best barrel opportunities out there!

Is It Open To The Public?

Unfortunately at the moment the Yeppoon wave pool is still an R&D facility and is not open to the public.

However, they’re currently in the process of getting council approval to upgrade the facility into a commercial venue – and the hope is the doors will open to the public by late 2022.

How Does It Compare to URBNSURF? 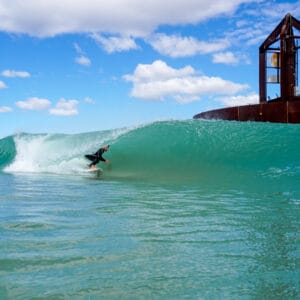 So this is the other big question – how does Surf Lakes compare to other wave pool experiences like The Wave in the UK, or URBNSURF in Melbourne?

Well, as much as I loved my surf trips to both wave pools, Surf Lakes is certainly something else.

Despite the looming metal structure and Jurassic Park style noises as the plunger geared up (something that will be contained and muffled in the final product) it still felt more natural.

I think a lot of this came down to how open the setup is.

You’re paddling on a peak, next to someone splitting it with you and you’re bobbing around in open water. 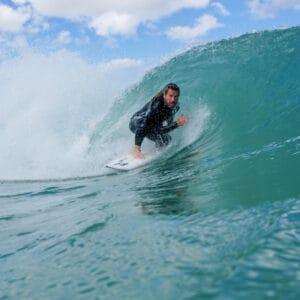 The Wave Garden options on the other hand are very enclosed and industrial in feel – the fact you’re paddling so close to a huge concrete wall does have a bearing on the overall experience.

The Yeppoon location itself does obviously come into play as well – the R&D site sits in a stunning part of Central Queensland, flanked by two mountains and is full of natural beauty.

As the site gets developed into a commercial operation this will alter slightly, but I’m really hoping they can retain the relaxed, more natural feel that it currently has.

If it came to the crunch and I had the option to choose between the two, currently I’d be swaying towards Surf Lakes as my preferred wave pool experience, and it’ll be interesting to see if that changes when the final product is open to the public. 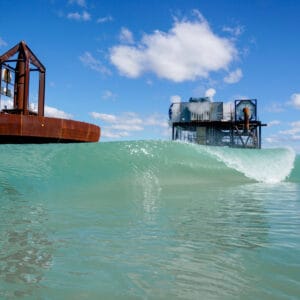 After spending 2 days surfing at the Yeppoon wave pool I can see how epic the upcoming roll out of Surf Lakes across the world is going to be and how much success they’re poised to achieve.

The sheer volume of waves, wave options and overall vibe of the wave pool was unlike anything else I’ve experienced.

The fact all levels of surfer can be catered for at the same time and the flexibility in design and wave types means that they’re going to appeal to a huge array of surfers – from beginners to pros.

And that design flexibility also means that no two Surf Lakes will be the same – you’ve only got to take a peak at the recently announced Las Vegas Surf Lake, which even boasts and underwater restaurant to see what is possible!

The bottom line is I’m frothing to get back to Surf Lakes and I’m looking forward to surfing and filming at Yeppoon when it’s revamped and running full throttle!

What are your thoughts on the Yeppoon wave pool?

Are you stoked to test it out? 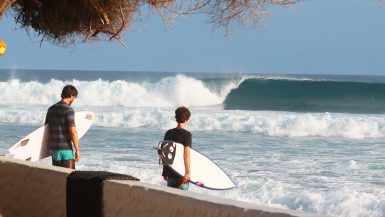 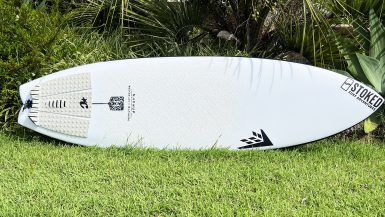 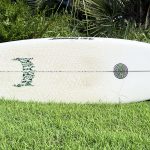 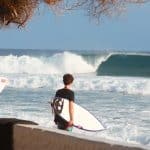