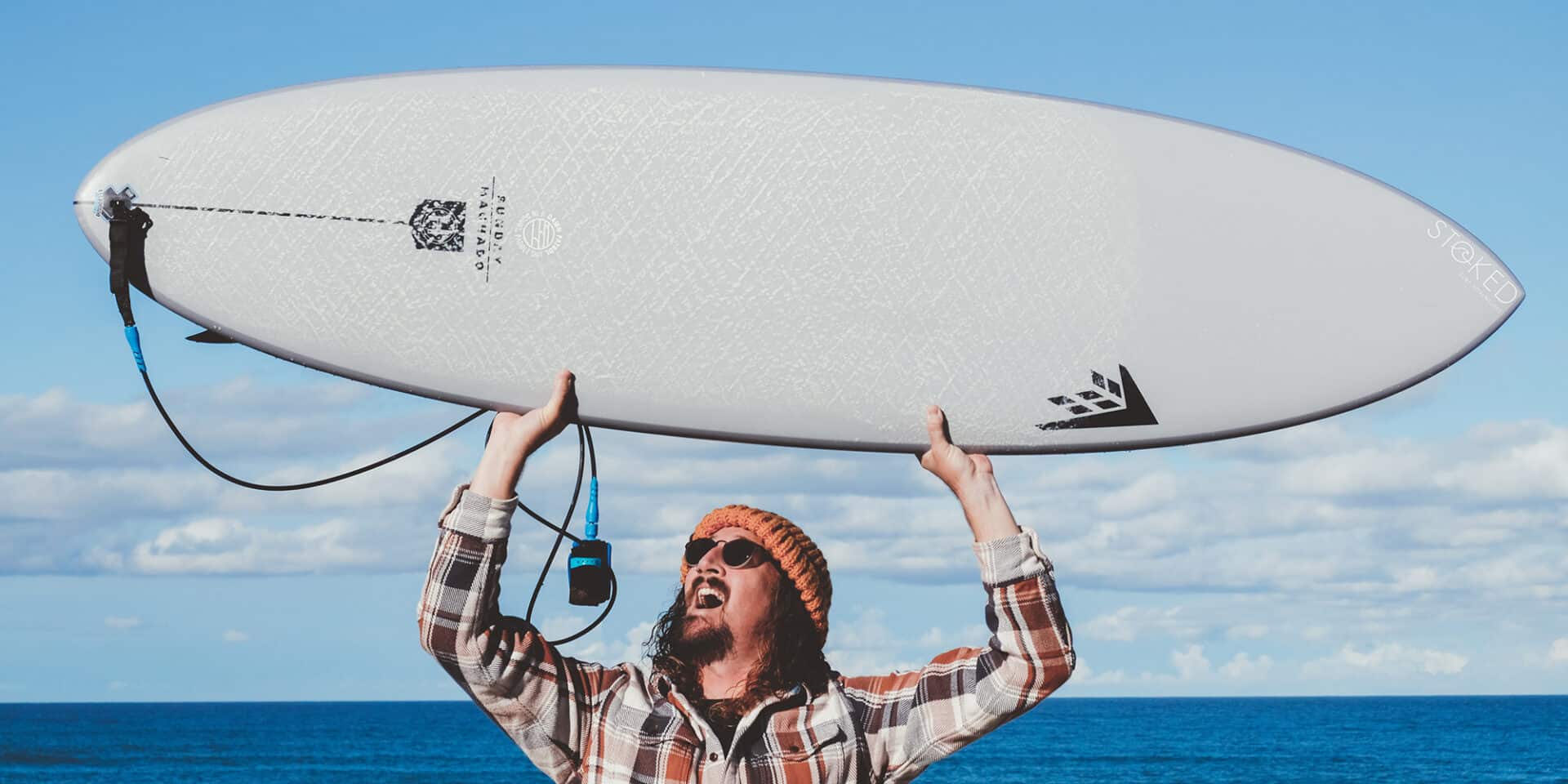 Thinking about buying the Firewire Sunday by Rob Machado? Here’s everything you need to know – inc which size to buy and the best fin setup!

The Firewire Sunday is the latest in a run of highly anticipated surfboard by style legend Rob Machado.

It’s is a bit of a unique board though – with sizes running from 5’6 to 7’3 and all with fin boxes allowing them to be ridden as twinnys, single fins or 2+1 setups.

Having ridden mine for the last few weeks here’s my thoughts on the Sunday, the sizing options, which fin setup I’d recommend and of course how it handles in the surf!

The Firewire Sundays biggest appeal is its mass appeal – multiple board options in one, with a huge variety of sizing options to suit all manner of surfers.

In that respect it can easily be argued that pretty much any surfer can find a spot for the Sunday in their quiver – it’s all a case of figuring out what that gap is and setting things up with that in mind.

Vague I know, but things will become a bit clearer once you’ve read the Length and Fin Setup sections!

Out of all the Machado Surfboards in the current range, the Firewire Sunday probably has the widest selection of sizes, which can cause a few issues when selecting which size to go with – something we’ll cover in more depth in a moment. 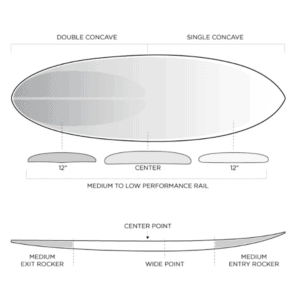 Running from 5’6 (31.2L) right through to 7’3 (55.6L), the Sunday certainly packs in ample foam, but the general consensus is dont be afraid to add in some extra litres!

When it comes to the contour of the boards it’s a single concave through to a double, with the double kicking in just behind the centre point. Combined with the medium entry and exit rocker this gives the board plenty of manoeuvrability, despite the chunky amounts of volume packed in.

One thing you will notice pretty quickly is the extra volume running right through the tail, in almost a dome like shape over the deck. Despite this extra volume under your back foot it’s still a pretty loose board and the round tail makes for some pretty smooth rail to rail transitions.

Paddle wise with the wide point just a tad past the centre, quite a pulled in nose and that medium rocker means that you will need to put in a little more paddle effort than you’d expect – even in the slightly longer options, so be aware of that.

The Firewire Sunday comes in Helium Construction – my favourite of the Firewire techs.

Coupled with a balsa stringer that runs around the outside of the board, it’s flex pattern is slightly different to standard PU boards and personally I really like the way they feel.

For more info on the Helium construction click here.

What Size Should You Choose?

One of the toughest decisions with the Firewire Sunday is picking the right size and there are options from 5’6 (31.1L) right through to 7’3 (55.6L). 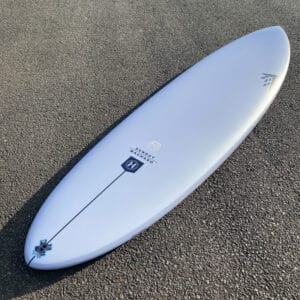 To figure out the size you should choose you really need to figure out where it sits in your quiver, what fin setup you’re looking at running in it, your level of surfing and of course the waves you’ll be paddling out in most of the time.

It can essentially fit into the realm of twin fin shortboard, mid length twin fin, egg style single fin or mid length 2+1 – there are so many ways to set this board up!

For me I wanted a cruisey board I could use in smaller style conditions and sat into the mid-length section of my quiver.

So with that in mind (and having handled a few sizing options in the shop) I went for the 6’8. Anything smaller felt like it wouldn’t work in mushier conditions, anything bigger felt a bit too chunky.

Having had the opportunity to interview Rob recently, his advice on Sunday sizing is to size up and he rides his shortboard option a pretty hefty 6 litres more than his standard shortboard. It doesn’t sound a lot but on a 5’6 board that’s a big pump up in volume.

And before you ask in the comments – for reference I’m 185cm and 83kg. 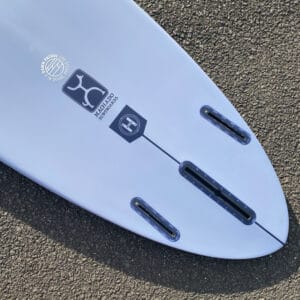 Along with the best sizing for your Firewire Sunday, the other big questions is which fin setup to run. The two are also pretty interlinked as well.

The Sunday – like the Lost Evil Twin – can work well as three boards in one – being able to be ridden as a twinny, a single fin or 2 + 1 setup.

I gave all 3 a test to see how it changed the board up and which I preferred overall:

Before the Firewire Sunday I hadn’t actually spent much time on twin fins. But this was the first fin configuration I decided to try. 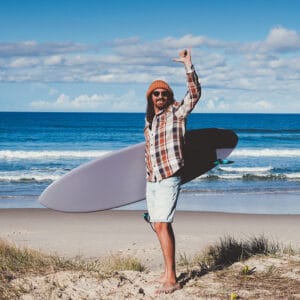 I was actually super stoked with how the 6’8 ran as a twinny – fast, loose and heaps of fun!

Originally I strapped in the front 2 fins from the Machado Quad Setup (which I also run in my Seaside and also the Seaside & Beyond) and although it went great I did feel for my height, weight and style I needed something a bit bigger.

I ended up investing in a set of Machado Keels, which are slightly bigger, and certainly feel more stable, especially in bigger conditions. These are also now my go to fins for the Machado Go Fish as well.

But, overall on the longer models I feel the smaller fin loosens things up nicely, so if you have the opportunity give them both a blast and see which fits your style more.

In fact the twin fin setup is my go to for the Firewire Sunday.

Admittedly when I bought mine I did originally think I’d be riding it as a single fin or with a smaller centre fin with side bites (the 2 + 1 setup) which is one of the reasons I opted for the 6’8 – so I could ride it as a single fin mid-length or egg style board.

As it turned out the single fin was fun, but compared to the twin fin option it wasn’t quite as enjoyable. I did strap in a 8.5″ single to get things started, which did make it a bit sluggish through sections.

Honestly though I don’t know when I’d be opting for single over twin fin now.

UPDATE: I’ve now swapped over to a 7’3 model (more details below) and the Machado 7’75” single fin in it is my go to setup, so much glide, fun and plenty of manoeuvrability!

The third fin option on the Sunday is the 2+1, using a smaller centre fin and the back fins from the Machado Quad setup.

You’ll find you get a lot more drive out of this setup and it’s a good option for slightly steeper or bigger days as it adds another point of contact with the wave.

Definitely better than the single fin approach and certainly worth a try – but still, twin fin for the win!

What Wave Size And Type Does It Suit? 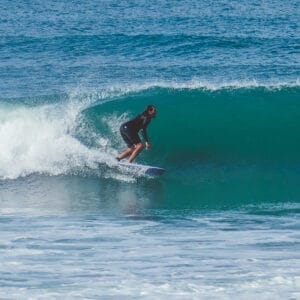 When it comes to wave size the Firewire Sunday certainly excels in medium conditions – around the chest high range – and certainly won’t be your go to board for bigger days.

For me the Sunday taps out about head high on longer lines, and about chest high on punchier waves.

You can surf it in bigger conditions, but it feels optimal in that chest to head high range., especially as a twin fin.

For those opting for the bigger sizes (like my 6’8) its super fun and cruisey, especially on a good point break and from what I can tell from the smaller sizing is it’s super fluid and responsive as a twin fin too.

The longer sizes aren’t going to be your go to on really punchy, beach break style surf either and certainly lends itself more to an easy roll in. The smaller size should handle some punch, but again if you’re running it as a twin fin it’s not going to be optimal in fast, hollower waves.

If you’re wanting a mid length board for bigger surf I’d deinfitely opt for the Seaside & Beyond instead – or even the original Seaside or Glazer if you’re in the smaller board sizes.

Having originally bought, ridden and reviewed the 6’8 model after a few months I did end up parting ways with it – both because I needed space for more review boards, but also I didn’t find myself surfing it as much as I preferred some of the other mid length and twin fin options I had access to.

BUT I have ended up picking up a 7’3 model with a Machado single fin recently and honestly it’s been incredible fun to surf!

All the paddle power and glide of a longboard in a smaller package, but with plenty of maneuverability and single fin style. It’s now my go to setup for smaller days at rolling point breaks and has just been heaps of fun to ride – so it’s certainly a setup I’d recommend.

So if you love all the fun of longboarding, but want it in an easier to handle package – the 7’3 as a single fin is well worth looking at!

I will eventually get around to surfing it as a twin fin as well, but honestly the single fin has me hooked! 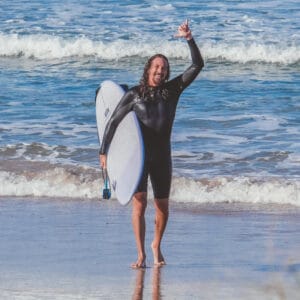 The toughest decision is going to be where you want it to sit in your quiver, and if you had the cash to splash you could easily find yourself grabbing a shorter and a longer option.

As a mid length twinny I’m loving it on cleaner, shoulder high days – especially at point breaks where you have plenty of run down the line to cruise and work the board.

Ultimately though having now also ridden the 7’3 as a single fin, that’s going to be the option that makes the final cut into my surfboard quiver!

At the moment it looks like Rob is working on a range of boards which would also be an epic combination as a stand alone quiver – but for the everyday surfer I think the Firewire Sunday offers up that fun, playfulness you’re probably looking for, with the added bonus of a few different fin options to try.

Have you tested out the Firewire Sunday?

Which size and fin setup did you go for?