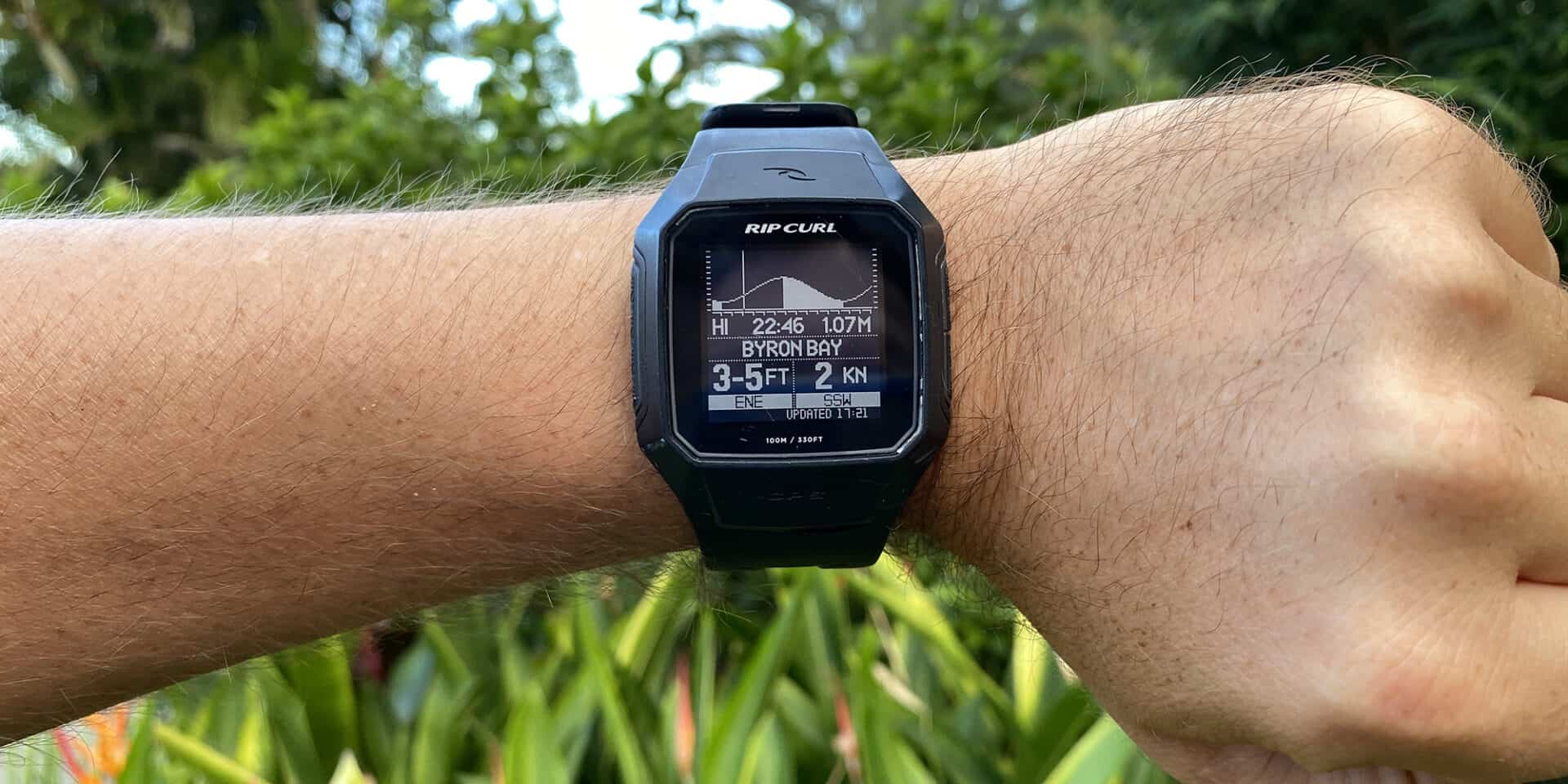 On the hunt for a new surf watch? The Ripcurl Search GPS 2 boasts wave tracking, surf report and tidal data – but is it worth the option for you?

The Ripcurl Search GPS 2 Surf Watch is one of the most popular surf watches on the market – including GPS surf tracking, tidal data and even the latest surf report right on your wrist.

But how does it handle in real life and is it the right surf watch for you? Well here’s my full hands on review… 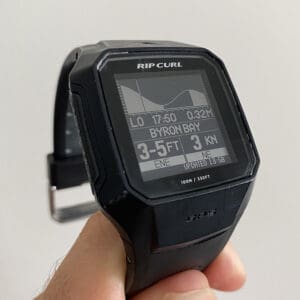 So what features does the Ripcurl Search GPS 2 come loaded with? Well you’ve pretty much got everything you need to check the conditions and even breakdown your surf sessions:

It’s also worth mentioning that the tracking data also works for a range of other sports too – including swimming, snowboarding and running.

Obviously the biggest upgrades over the standard (and much cheaper) tidal surf watches is both the GPS session tracking and the realtime swell/wind reports too.

When it comes to the build of the Search GPS 2 it’s a solid piece of kit, made out of ABS hardened plastic, with a rubber strap. However, for those (like myself!) with fairly small wrists it’s going to feel pretty chunky, but not overly so.

The strap itself feels really secure and I wasn’t worried about it coming loose whilst surfing – even in some pretty hectic beat downs – and although it’s not the most comfortable watch strap I’ve ever worn it’s not uncomfortable by any means.

One thing I will say though is that the plastic coating, although durable, certainly isn’t scuff resistant, so be aware of that. The same goes for the watch face itself as well.

When it comes to buttons, there are only 3 buttons on the watch. The large one on the left hand side basically acts as the menu and select button, whilst the two smaller ones on the right hand side allow you to toggle through the options. 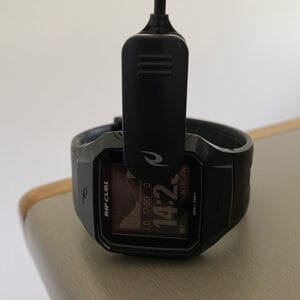 When it comes to battery life the Search GPS 2 takes about 3 hours to fully charge and you’ll get about 7 hours worth of surf tracking on a full charge, which is pretty solid.

If you’re just using it as a watch you’ll generally get about 2-3 months out of a single charge.

The original Search GPS did have 10 hours of surf tracking, but was considerably chunkier, so it’s worth the trade off.

The watch charger comes in USB format and clamps over the right hand side of the watch, just be aware that it can be a bit fiddly to align properly so double check it’s charging before you walk away!

Alongside your surf watch you’ll also need to install the SearchGPS app – which oddly is only available on iOS and desktop, Android doesn’t have one! 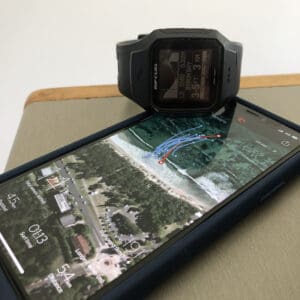 When you first use your watch you’ll use it to sync your data and install any updates and after that it’ll be used to showcase your surf session data (more on that in just a second!)

The app itself is pretty basic and I was a little puzzled why setting things like the tide location, date, time have to be done manually via the watch interface rather than a bit more easily via the app. It’s not a big deal, but if you’re bouncing around on surf trips it would make setting your surf spot for tide and swell data much more seamless.

One of the bonus features of the app is being able to follow others surfers too. This includes the Ripcurl Pro team (including the likes of Fanning and Medina) but also your buddies too – so you can compare sessions, wave counts and more.

Fun for a little rivalry for sure.

The whole tracking pro surfers would be kinda fun, but it seems the likes of Medina and Fanning haven’t logged a session since 2015, and Owen Wrights last logged session in late 2019 is mainly him driving home from Snapper!

One of the biggest features of the Search GPS 2 is of course tracking your surf sessions. Getting this all start is all pretty simple:

…one issue I did have was the watch taking a while to lock in your GPS signal to start tracking (even in Australia), so I’d make sure you get that all started as you hit the beach, that way by the time you’ve leashed up and done a quick warm up everythings good to go.

During your session you can then toggle through your key stats (top speed, wave count etc) although it does lack total distance surfed, which is something I feel should be added in.

Post surf it’s a case of booting up the app post surf, syncing it and checking out your session on your phone!

When it comes to the surf session data everything is all laid out in map form with all the main data overlaid:

You can then swipe up on the map to reveal extra data – including the swell report, wind report and tide – which is super handy when planning your next surf mission to a particular spot, especially when combined with your own personal rating of the session

Below this is a chart of your waves, which includes length and top speed.

One of the other lesser marketed features of the Ripcurl Search GPS 2 is paddle tracking. Personally I found this a pretty interesting stat to look into and I was pretty shocked at how far I’m paddling during a session!

When you boot up the app to replay your session it’ll also map out your paddle patterns and show you a snapshot of you paddling before you caught each wave.

For some people this will just be a token feature, but if you’re intent on pushing your surfing to the next level I think this is a really good bit of data to analyse, especially if you’re surfing the same spot consistently.

Another pretty fun feature is replaying your entire session (you can select from 10x or 20x speed!) which will draw out all your paddling and waves caught. Again for some this will be a quick novelty, for others it’s a really interesting piece of data to analyse and push your surf skills further.

Versus The Apple Watch

So if you’ve been a reader of the site for a while you’ll know that the Apple Watch has been my go to surf watch for the last few years so naturally this is the benchmark when testing out the Ripcurl Search GPS 2 as they both boast similar features. 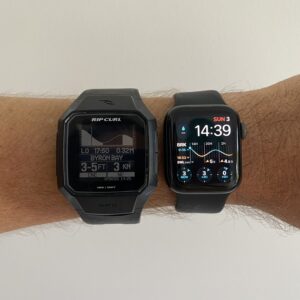 Loaded up with the Dawn Patrol surf app the Apple Watch (from Series 3 right through to the new Apple Watch Series 7) allow you to both track your session and give you all the realtime wind and swell data you need to plan your session.

The obvious advantage of the Apple Watch is all the added extra functionality and apps it comes with – especially if you’re an iPhone user.

And on top of that you have the full array of Apple Watch bands to choose from, so you can customise it to suit your own style, alongside the much sleeker Apple Watch design too.

When it comes to price these extra advantages aren’t a huge jump either – with the Apple Watch SE (which is more than capable of tracking your sessions) coming in at only £20/ AU$50 more than the Ripcurl Surf Watch. In fact it’s actually US$20 cheaper if you buy it in the States too!

So Would I Recommend It? 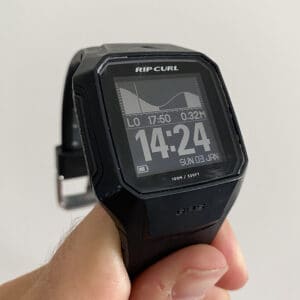 Ok so lets cut to the chase here – what are my final thoughts and would I recommend the Ripcurl Search GPS 2?

However given the price point and limited functionality outside of surf tracking I still have to say that the Apple Watch is still my go to surf watch. Plus the Apple Watch (especially with the new Solo Loop band) is much more comfortable and stylish.

That being said though, if you don’t have the cash to splash (and lets be honest it’s not a small investment) you can pickup a second hand one at a considerable discount, which deinfitely makes it a lot better value!

Are you going to be grabbing a Ripcurl Search GPS 2?

If not which surf watch has caught your eye?