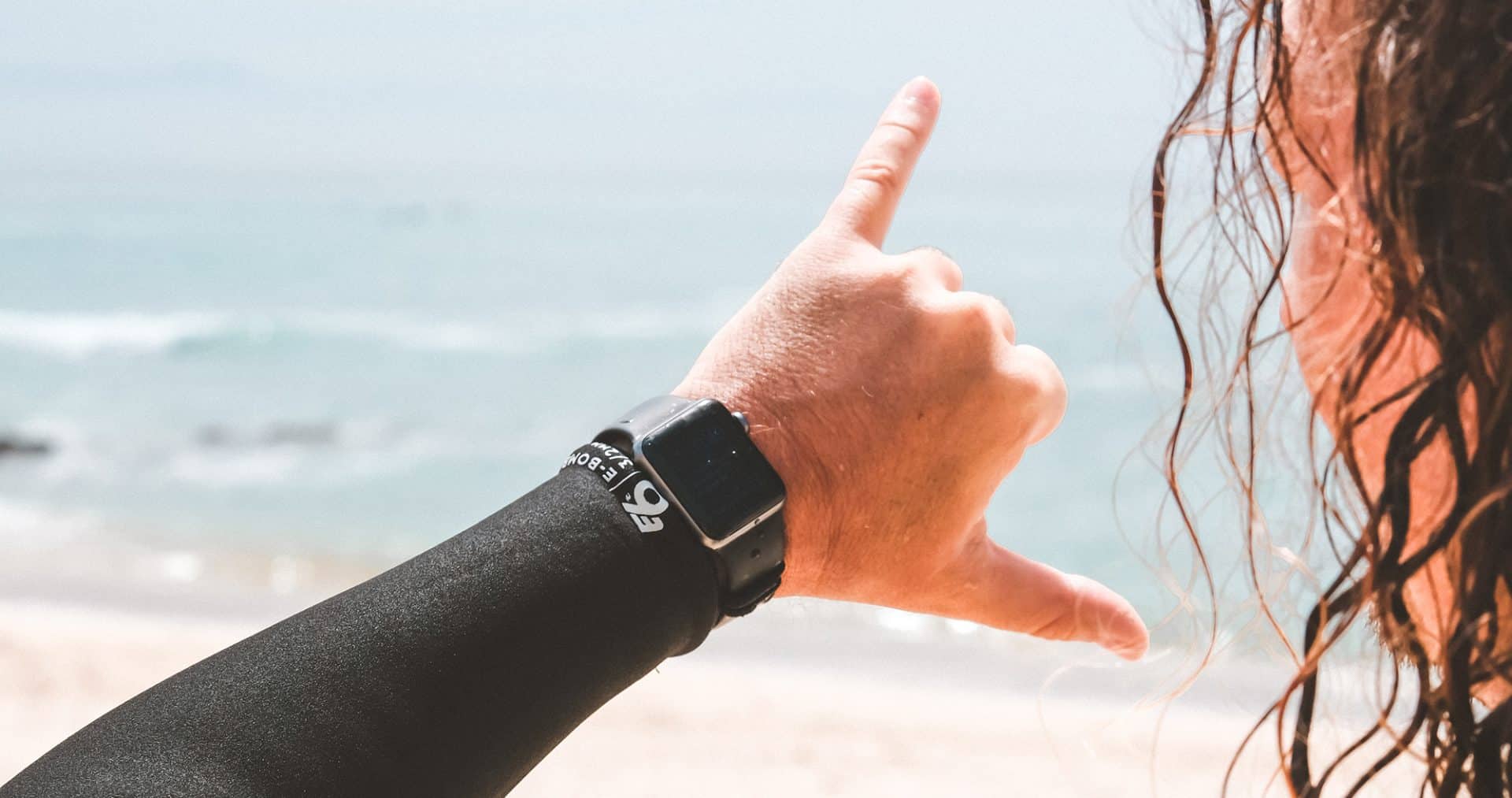 Did Apple Create The Best Ever Surf Watch?

Trying to figure out how to customise your Apple watch for surf? Here’s my guide on how to turn your Apple Watch into the ultimate surf watch!

There are three things I really love in life – travelling, surfing and technology.

And when I can combine some or all of them it really gets me stoked!

I’m also a huge Apple geek but was on the fence about getting an Apple Watch.

But after learning the new series is waterproof I began thinking – if it can track swim sessions could it track my surfing?

I’ve always been intrigued about the length of my waves, my wave count and also how much exercise surfing really so I decided to do some research, and after A LOT of digging around the internet (seriously this info was hard to find, so you can thank me later!) I discovered that there was a way to not just track my surfing, but also turn it into a fully functioning surf watch.

Yup your can customise your Apple Watch into a surf watch – displaying tide times and even surf reports with just a quick glance.

So how do you turn your Apple Watch into a surf watch?

…also as a quick update due to some comments I’d like to clarify that you only need the GPS Apple Watch to get this all to work properly, so don’t feel you need to spend the extra on the cellular option to track your surf!

Click here for more info on the Apple Watch and to buy yours!

Did Apple Create The Best Ever Surf Watch?

Customise It Into The Ultimate Surf Watch

And best of all they’re totally FREE.

Feb 2020 UPDATE: Surface has now been renamed to “Surf Watch”

Sept 2021 UPDATE: Both Dawn Patrol and Surf Watch have the option for a paid upgrade to unlock even more features

Surf Watch provides the complications (Apples fancy name for the customisation of your Apple Watch face – they should should be called widgets really!) whilst Dawn Patrol is going to be where you head to track your surf sessions.

Now you can use Surf Watch for both but personally I find their interface and layout rather buggy and not as appealing.

Dawn Patrol on the other hand is slick and has everything you need in a smooth, elegant app.

…and I’ve spoken to the team behind it and there are some epic updates in the pipeline too!

Once you have those two installed on both your phone and watch, get your current surf spots selected in Surf Watch (via the Magicseaweed or Willy Weather database) and then you’ll need to update your watch face to get all the surf info you need at a glance.

I opted for the modular face – choosing the central area to display the current surf conditions, whilst the lower left shows their minimal tide icon which sits quite nicely in there.

It’s as easy as that!

Sept 2020 UPDATE: You can now fully customise your watch using just Dawn Patrol – click here for the full guide, or watch the video below! 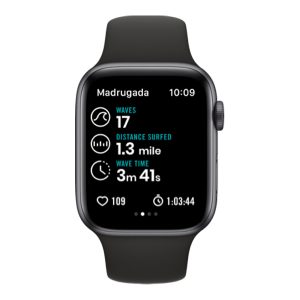 Now the real fun comes when you hit the water and this is where Dawn Patrol comes into play.

At the beginning of your session you simply load the app on your watch and hit start session.

The display will then show your heart rate, session time as well as stats on total ride length, time and also wave count.

Throughout your session Dawn Patrol will be recording your stats and after each wave you’ll be able to see the ride time, length and top speed – which definitely fuels the stoke!

But it’s when you boot up the app on your iPhone that you’ll really get to geek out!

After clicking on your session you’ll be shown a satellite shot of the surf break with all your waves mapped out on it! Clicking on each wave line will bring up the full stats of the ride.

You can even get it to display the waves you missed (rather depressing!hahaha!)

I’ve been using it all over the globe (including the surfing in the Maldives, Mentawais, Australia and South Africa) and it’s great for pushing your sessions to the next level.

I’m hunting for a higher wave count, a longer ride and a faster speed! Here are some of my stats so far;

If you’re based at a spot for a while it’s also super helpful for seeing where you need to sit in the lineup for the best waves and seeing how you progress.

Which Watch Strap Should You Use?

I’ve had a lot of questions on both my YouTube tutorial and on the blog about what Apple Watch strap is best for surfing.

Over the last couple of years I’ve simply used the standard Apple Watch band and it hasn’t failed me. Admittedly I have used a hair band as a backup loop incase, but overall I’ve had no issues.

With that being said though I have now met multiple people who have lost their Apple Watches whilst surfing with them!

One of these people highly recommend using the Apple Sports Loop whilst surfing – the velcro like style makes it much more secure and the end of the strap is even built to stop the loop from becoming fully undone, which provides a lot of extra safety. The downside with this strap though is the fact the fabric material does take a while to dry post surf.

NOMAD offer some really solid Apple Watch straps too and their Active Straps are ideal for people who want something solid and secure, but also have a premium, fashionable finish, so check them out.

The other option I’ve come across is the UAG Apple Watch Band which seems even more secure, but I must admit personally I’m not as keen on them aesthetic wise so I’m sticking with my Apple Solo loop instead.

Sept 2020 Update: Apple have now all released the new “Solo Loop” band. I’ve been using it since they launched it with the Apple Watch Series 6 and it’s certainly my preferred Apple Watch band for surfing. Not only is it snug fitting and comfortable, but it also dries super quickly too.

What About The Ripcurl GPS Watch?

So the instant comparison you’ll be making is against the Ripcurl Search GPS watch.

It’s a solid surf watch, as you’d expect from a surf company like RipCurl, (check out my full review of it here) but when you take into account it’s the same price as an entry level Apple Watch (series 3) what would you rather have?

I’ve spoken to a few people who mentioned they were thinking about buying the new RipCurl Search GPS 2 watch, however once I explained how I’ve customised my Apple Watch and the fact it’s on par price wise and they opted to go that route instead!

Your call, but I weighed up the options and the cost and I’m stoked with my decision!

Check out this guide to the best surf watches in the world…but I’m pretty sure you’ll still end up with an Apple Watch!

Which Apple Watches Does This Work On?

Although initially I set my Apple Watch Series 3 up as a surf watch, the updates in the apps and WatchOS have now limited this older watch model. For example, the customer Dawn Patrol Watch Faces are available for Apple Watch Series 4, 5, 6 and SE.
You’ll need iOS 14 and WatchOS 7 for this feature to work.
If you do have a Series 3 you can still get some of the core features to work though.

And with the release of the Series 5 the Apple Watch Series 3 is now cheaper than ever, making an Apple Surf Watch even more affordable and certainly even better value than the Ripcurl GPS!

In Sept 2020 Apple also announced the new Apple Watch Series 6 – and as you’d expect it’s still waterproof (up to 50m) and with the firmware upgrades both the Dawn Patrol and Surf Watch apps will be compatible.

I’ve actually just ordered mine (finally upgrading from the Series 3!) and will be doing a full review soon.

Alongside the Apple Watch Series 6, they also launched the Solo Loop band – which looks like the perfect option for anyone looking to surf with the Apple Watch.

The good news is – yes you can!

The Apple Watch SE still has the same waterproof design and with the upgraded chipset (a step up from the Series 3) it’ll still be able to run both surf apps!

The latest Apple Watch SE was launched in Sept 2022 and is still the best value Apple Watch for those looking to track their surfing.

When it hit the market in 2021, the Apple Watch Series 7 boasted the title of most rugged Apple watch to date:

So yeah, it’s safe to safe the you can take the Apple Watch Series 7 surfing!

Launched in 2022, the Apple Watch Series 8, has much the same water resistance and ruggedness as the Series 7. So if you’re looking to upgrade it’s a solid option for tracking your surfing too.

If you want the ultimate in durability with your Apple Watch, the new Apple Watch Ultra (launched in 2022) boats some seriously solid features that make it ideal as a surf watch:

So if you’re looking for the top of the range and advance durability, the Apple Watch Ultra is the best choice, but also with the biggest price tag!

As the Apple Watch has evolved, and indeed how the apps themselves have evolved with updates, I’ve been trying to keep this post as up to date as possible!

For full transparency (and to keep the post nice and tidy, as well as relevant) here are all the previous updates, incase you wanted to give them a read!)

Thought I’d add this into the guide as it provides some pretty epic extras! In late May Dawn Patrol released a new version of the app, which now allows you to access even more info from your surf session.

So things like waves speed and wave length for your whole session can now be viewed as a chart just by swiping up on the main session home screen.

The biggest update though has been adding tidal data to the app as well.

You can now add Dawn Patrol as a widget to your iPhone (when you swipe right on the home screen) which will give you the data for your local spot. This widget can also now be added to the Apple Watch too as a complication.

Alongside this the tidal data will also be part of the stats on your session as well – so you can see what part of the tide results in your best wave count or longest rides.

…I’m hoping they’ll add the surf forecast info soon so everything in this guide can be a single app!

After a whole heap of messages from people trying to find an alternative to Surface after it disappeared from the app store I unfortunately hit a dead end – which was even more infuriating as I upgraded my iPhone and lost access to it myself too!

Cheers to Alex in the comments though who in January 2020 gave me a heads up that Surface is back in the App Store (well the UK one at least!) but is now renamed as SURF WATCH – and I can confirm that I’ve been able to reinstall it and can still use it to display the surf report.

There is now an extra step though – you have to add Surf Watch to the watch dock (via the watch app on your iPhone) to make it work correctly.

Have you used the Apple Watch as a surf watch?

What are your top sessions?