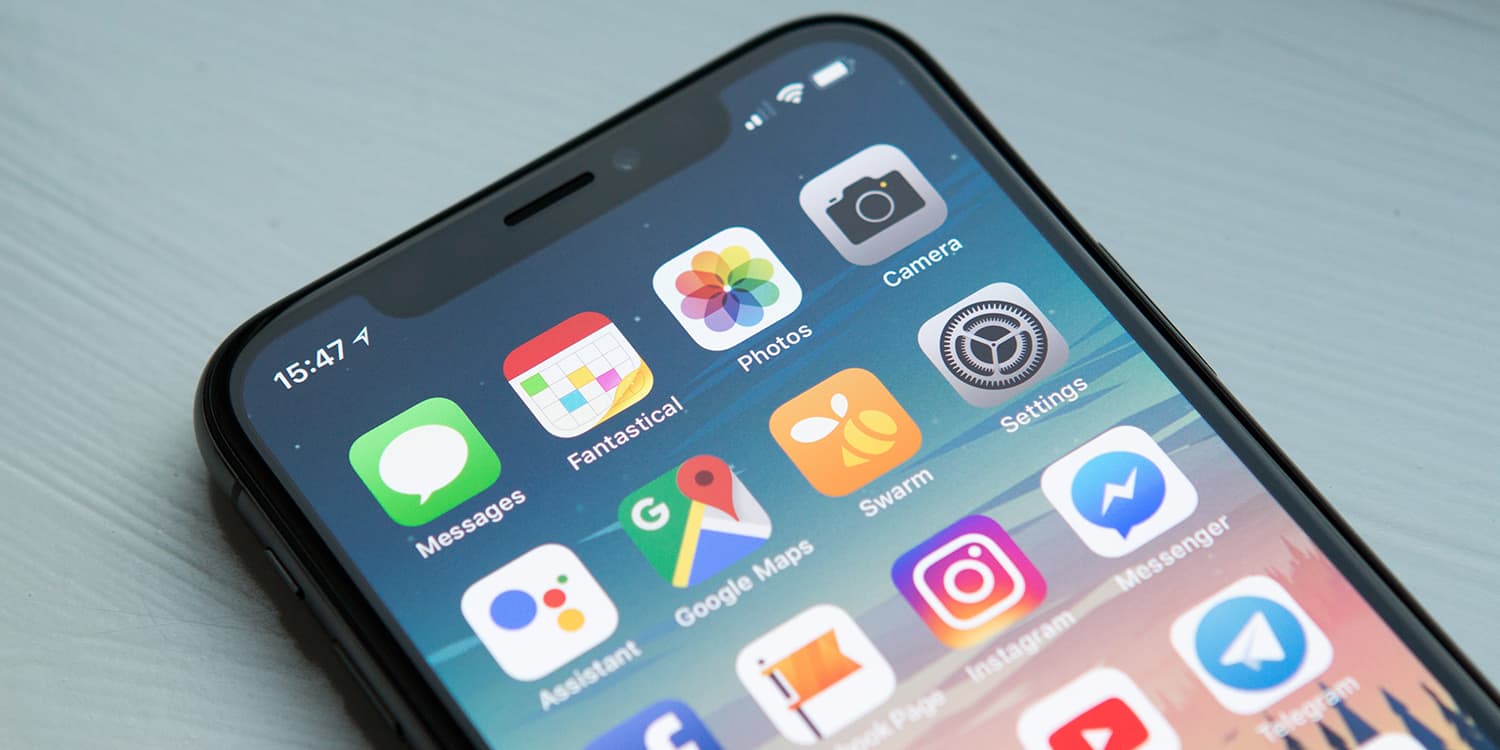 If you surf you need to download these 10 epic surf apps! From surf reports and surf training to wave trackers and coaching! Time to get more waves!

Whether you just want to know what the surf is doing or want a personal trainer in your pocket – there’s a whole host of surf apps out there to get your digital salt water fix.

From the best surf report apps through to tracking your surf in the water and even shark alerts – here are my favourite surf apps out there to cover all bases!

Probably my most used surf apps – combined with my Apple Watch, the Dawn Patrol app allows me to track my surf sessions. From wave count and a GPS map of all your waves to calories burned and the tide times, it’s a super handy app for anyone who wants to turn their Apple Watch into a surf watch (more on that here!).

With a great UI and customer support it’s also free – well unless you want to upgrade to the Soul Surfer subscription –  winning! 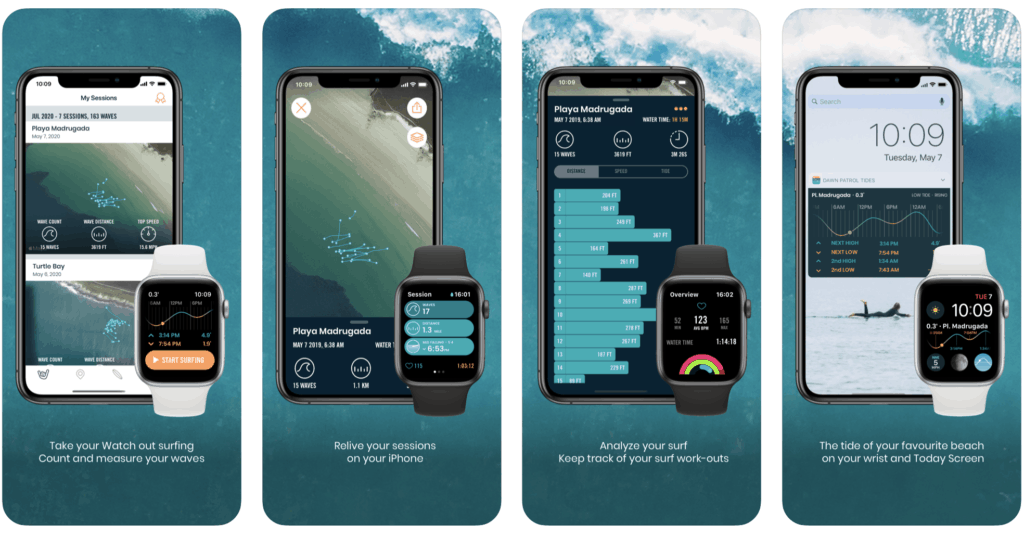 With a huge range of webcams all over the globe the Surfline app is the go to surf reporting app for most of my USA buddies as well as covering spots all over the planet too.

The ads can be annoying, but there’s no denying that the surf reporting side of things is pretty handy for planning your next surf mission – especially if you’re venturing further afield or scouting out some new spots in a new country.

The apps free too so get it downloaded! 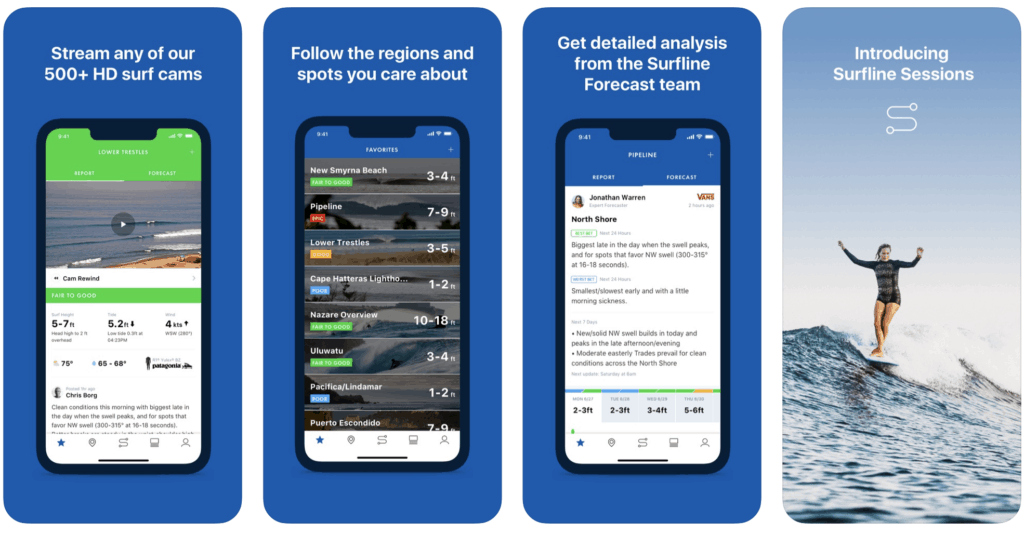 If you surf, the chances are you’re following the world tour – and the WSL app is the best surf app for that.

Watch the live streams of each stops (waaaaaay more user friendly than the sh*tty Facebook Live option!), track the leader board and get your buddies involved in a fantasy surf league. 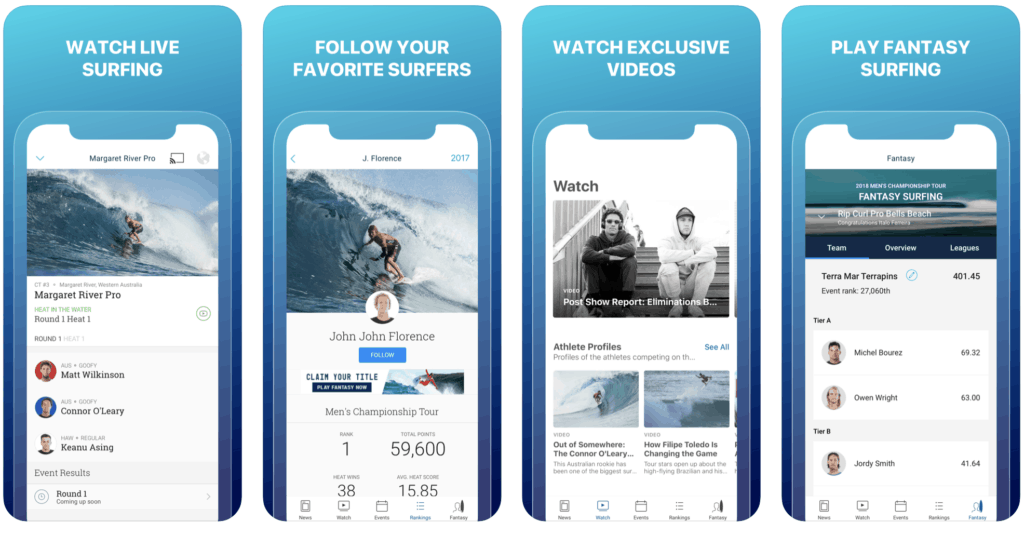 If you’re serious about your surf sessions then then Windy is a must – with super reliable wind forecasting and a great UI.

The reactive maps showing your the coastline and wind direction also make it great for checking out conditions for surf spots you’re not too familiar with too, which is super handy when you’re travelling around.

For those who love to geek out on the details there’s so much info on tides, weather, swell power and more to dig into. But if you aren’t too bothered about that kind of thing you can easily customise it to only show the info you want! 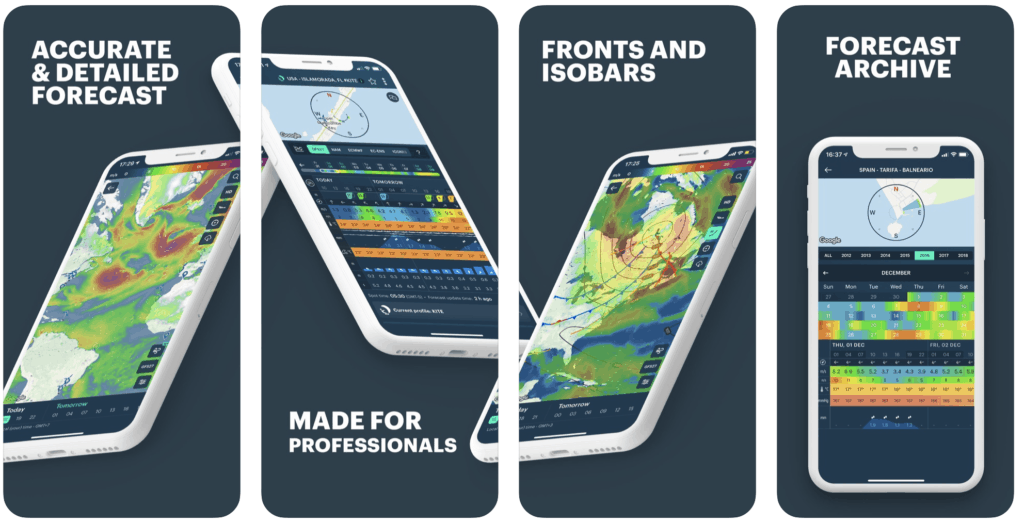 Take your surfing to the next level with Surf Athlete – a surf training programme which basically puts a personal coach in your pocket, all specifically design for surfing.

Whether you want to perfect your pop, build your core or start getting that muscle memory going for those big backhand hacks it’s pretty awesome.

It’s not the cheapest, with courses costing ranging from $18USD to $127USD for the 12 week programme but if you’re serious about taking your surfing to the next level it’s a solid investment and will certainly boost your performance in the water. 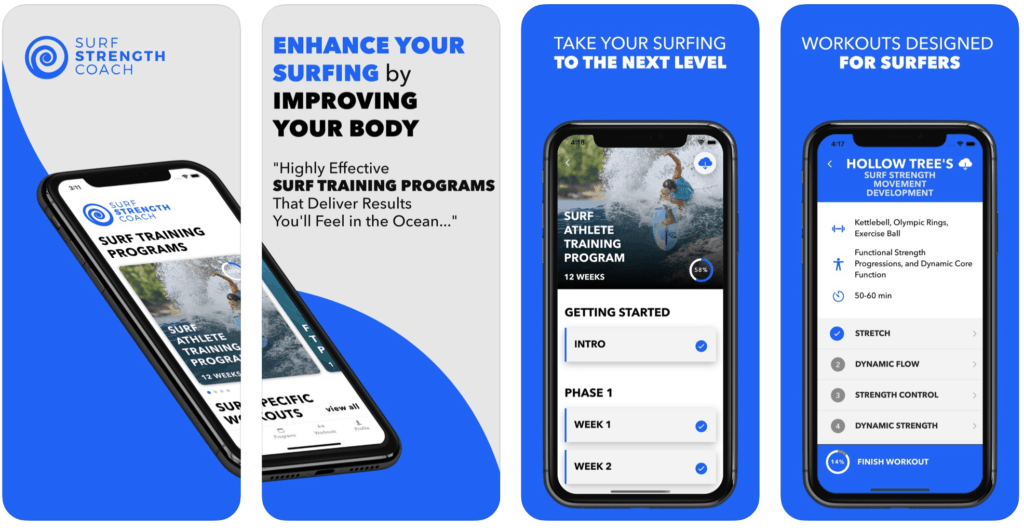 Aussie buddies, keep track of the men in grey suits with the Dorsal app – which lives reports shark sightings along the coast of Australia!

You can turn on notifications for your local break, but honestly I wouldn’t else you’ll never get in the water again!haha!  Still it’s a good one to check pre surf just incase the beach is closed.

Dorsal is also now covering USA and Hawaii too. 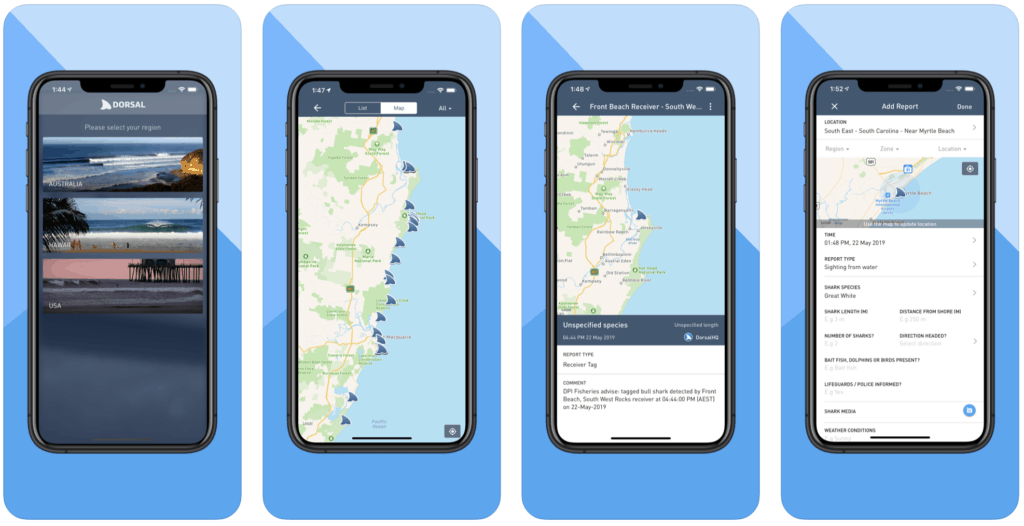 Love it or hate it, you probably use Magicseaweed regularly as a surfer (especially if you’re from the UK or Europe) so their free surf app is a no brainer. If you’re not familiar with it, it gives you access to 7 day surf forecasts for thousands of surf spots all over the world.

Admittedly it’s certainly more accurate in some places than others, so take it with a pinch of salt and you’ll soon learn the ideal forecast for your most frequented spots! 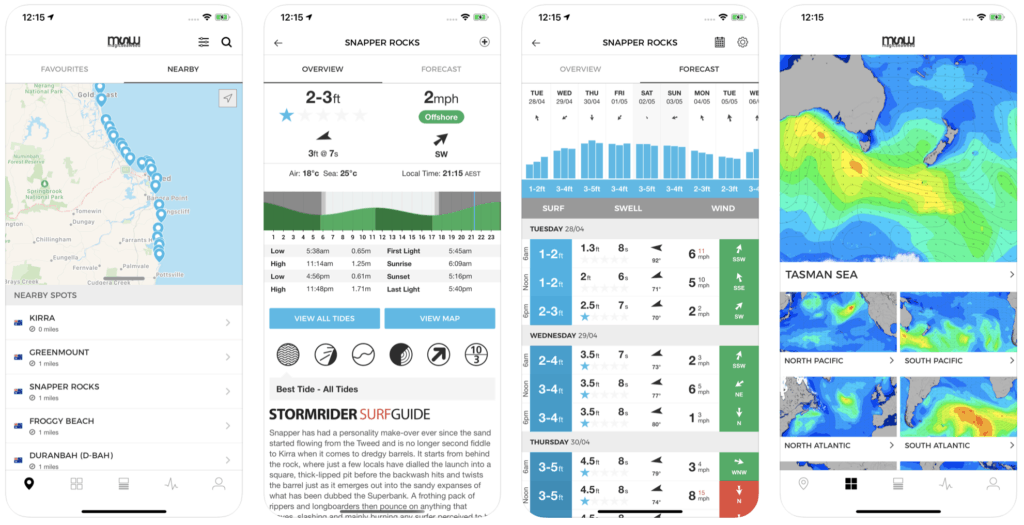 Another awesome tool for those who are putting some more serious time into their training, the Coaches Eye app helps you analyse your surf sessions if you have someone filming them.

A great addition to anyone surf coaching or training themselves slow mo your footage for in depth analysis of your body position and skills as well as annotating it to help visually explain everything.

You can also record the feedback, with audio for checking out later on or for surf coaches/surf schools replaying examples in a classroom style situation. 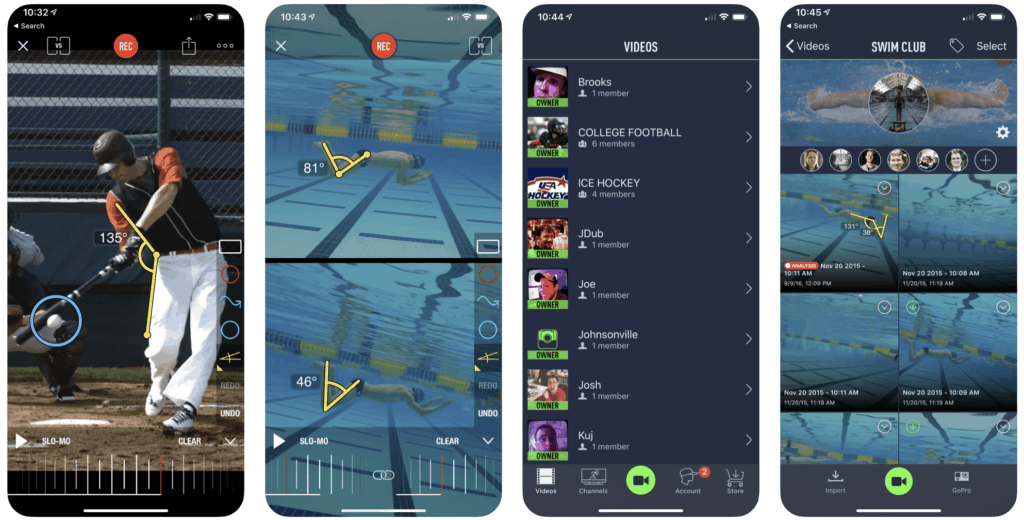 Based on the 7 minute workout routine it will work your core, balance and strength in a condensed but effective workout regime.

And lets face it if you cant find 7 minutes a day to get your sh*t together and help boost your surfing, then you have bigger problems to deal with! 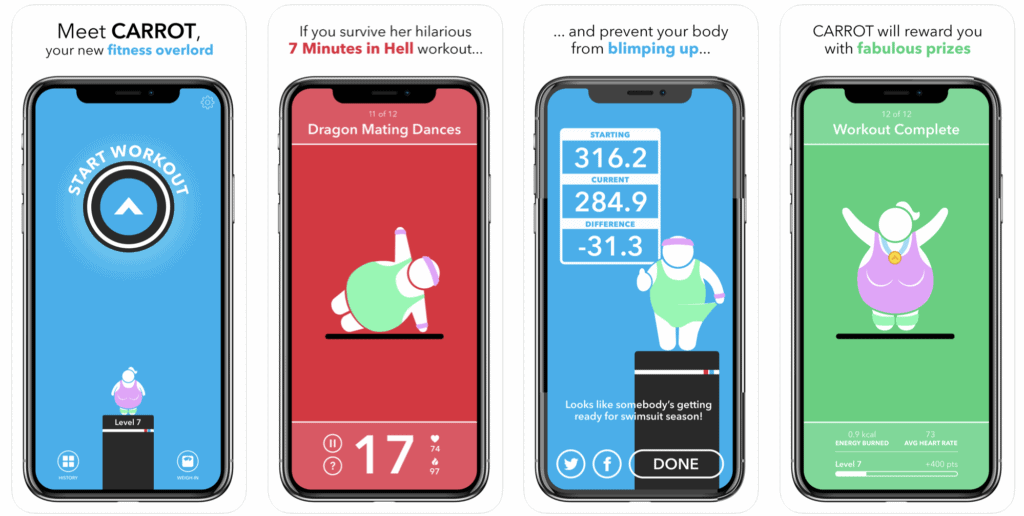 Surf and yoga go hand in hand – so these awesome 5 minute yoga workouts are an ideal addition to your daily routine.

From improving your flexibility to building up that core strength – a regular yoga routine will certainly boost your surf sessions for the better.

So whether you’re a regular yogi or just starting out this free app (with some extra paid in app purchases) is a great addition to all your surf apps. 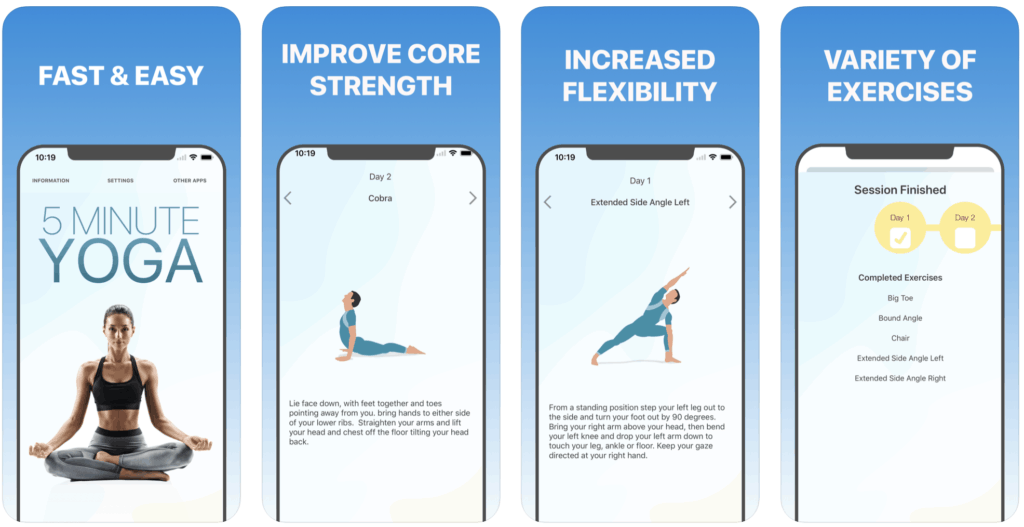 I’m slightly reluctant to include Surf Watch in this list as I don’t actually like the app itself! The UI is a bit clunky and it crashes quite a bit. 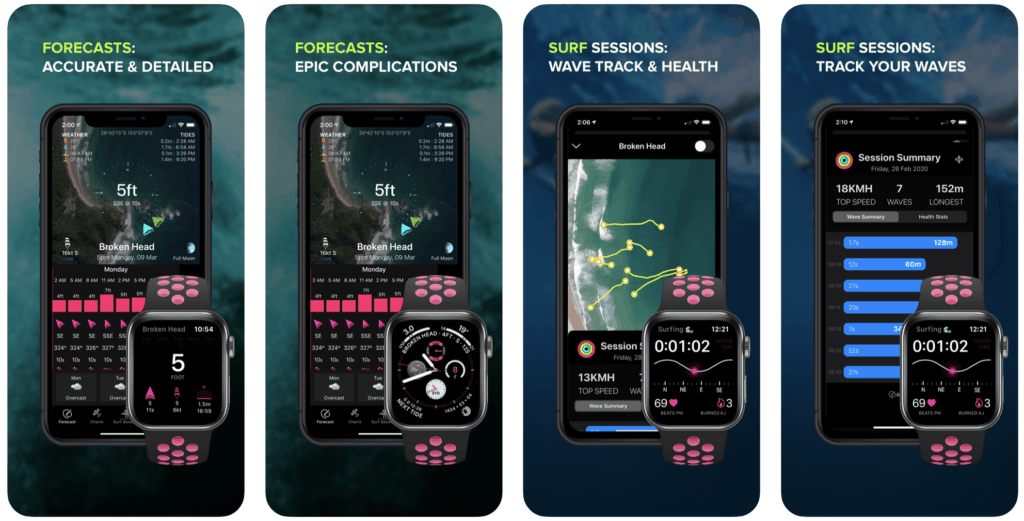 What surf apps do you have on your phone?