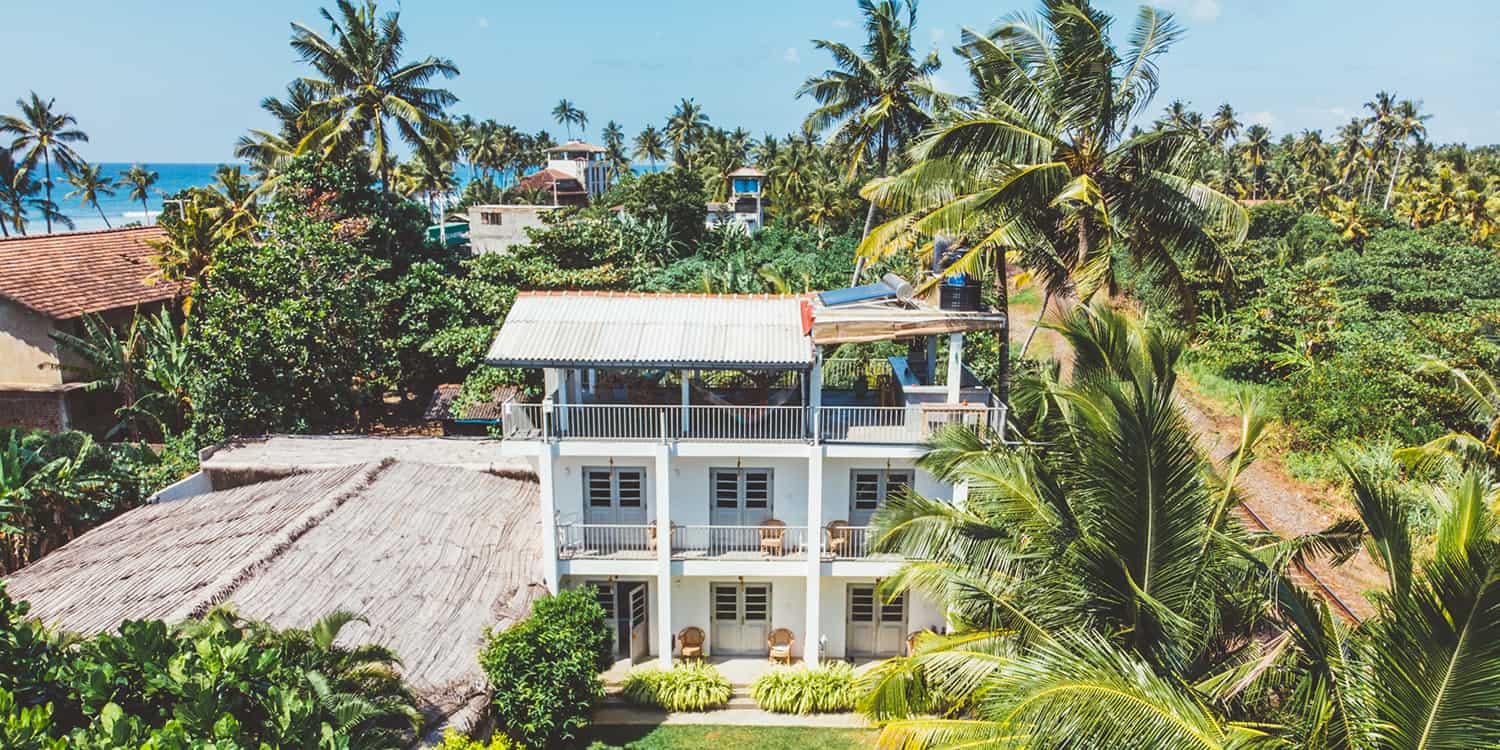 Looking for an epic Sri Lanka surf camp with an emphasis on high quality coaching and waves right in front? Well the Ticket To Ride Sri Lanka Surf House ticks all the boxes

Thinking about learning to surf in Sri Lanka or want to take your surf skills to the next level?

I joined the crew of the Ticket To Ride Sri Lanka Surf House for two weeks of waves, coaching and tropical vibes – but is right for you?

You’ll find the surf house situated in the awesome little surf town of Ahangama, on the South West Coast of Sri Lanka, roughly a 2.5 hour taxi ride from the main international airport in Colombo.

To help cover all types of traveller The Ticket To Ride Surf House offer 3 accommodation options;

Obviously the triple option is ideal for solo travellers, with the twin and double aimed at those travelling with a friend in a couple or just wanting their own privacy.

As you’d expect from a high end surf camp the Ticket To Ride surf house comes with lots of creature comforts and added extras, including;

Currently the surf house offers a weekly surf camp package – which includes pretty much everything you’d need and expect;

Whether you’re wanting to learn to surf or looking for guiding and coaching for a higher level these inclusions will help you make the most of the waves there.

Want to know what a day in the life of the camp looks like? Well here’s an example of what you’ll get up to most days;

The above is pretty much the schedule 5 days of the week, with Wednesday being a day off and Saturday being arrival/departure day. Trust me you’ll want that rest day to recover!haha!

The biggest draw for Ticket To Ride over other surf camps in Sri Lanka (and there are more than a few to choose from along this stretch of coastline!) is the standard of coaching they offer.

Now I’m not trying to bad mouth any of the other camps – but honestly it’s going to be hard pushed for them to beat (or even match) the caliber of coaching on offer with Ticket To Ride.

Coaches Nikita and David have years of experience under their belts (or maybe that should be wetsuits?!) – with both of them having surfed competitively both on a National and International level. Nikita even competed on the world tour and has 9 South Africa titles to her name!

…now not many surf camps can boats those credentials hey?

But willy waving aside, the coaching these guys offer is pretty epic  – both in and out of the water.

The surf camp package includes 5 surf theory and analysis session a week, which cover everything from wave selection to boards types and beach safety. All these sessions are interactive rather than simply being lectures, where everyone can chip in feedback as well as asking questions.

On top of this the also do 2 video analysis sessions each week – which honestly are the highlight in terms of coaching and kicking you into gear. You’d be amazing how much you can learn from a a few clips of yourself and will quickly realise that you aren’t looking quite as epic as you might think!

These sessions are done in smaller groups (usually in pairs) as obviously not everyone wants to be critiqued in front of a group, but you’ll also learn heaps from watching other peoples feedback too.

When it comes to your time in the water

The bottom line is you can learn to surf or learn to be a surfer.

Anyone can quickly learn how to stand up in white water and ‘surf’.

The knowledge you’ll gain from the Ticket To Ride coaches will set you up with solid foundations and technique to continue your surfing and rally become a surfer.

In terms of the waves you’ll hit up really does depend on what the swell and conditions are doing (as with anywhere!) but there are over 15 surf spots within a 10 minute tuk tuk ride of the camp, so there are plenty of options.

Two of the biggest draws of surfing in Sri Lanka are the large amount of surf spots on offer as well as the fact many are perfect for beginner and intermediate surfers – as opposed to places like Bali which are much heavier.

To begin with though you’ll be doing your initial lessons/skill assessment at Kabalana Beach – a long, sandy bottom beach break with plenty of peaks to choose from. The long, spilling white water is perfect for those learning to surf and on a bigger swell more advanced surfers will find some punchy walls to enjoy. The left hand side of the beach has a reef section as well.

From there the more advanced surfers moved onto Marshmallows, a really fun break which offers up a much longer ride than Kabalana, ideal for practicing your first turns and getting to grips with unbroken waves.

Another spot we hit up a few times with the advanced group was Sion – which offered bigger, more challenging waves, as well as a multi peak reef just a 5min ride from the camp…which will remain unnamed 😉

There are plenty of awesome Sri Lanka surf spots to choose from within a short tuk tuk ride of the camp, so if you decide to go solo at any point you’ve got a lot to choose from.

One of the best parts of the surf lessons was the fact the first one of the day started at 6am – which allowed us to avoid the crowds and also meant you have middle of the day to recover and relax, as well as avoiding the midday heat!

Should you bring your own board?

If you’re learning to surf all your kit is included in the cost – a range of foamier, NSPs and a few Soft Tech shortboards too. However if you already surf bringing a board isn’t an issue, you’re still welcome to use the in-house stuff too if you’d like to try them out.

They do charge extra for premium boards (a range of DVG , fibreglass shortboards) – you can test one out for a session FOC or pay £50 for the week to upgrade.

Do You Need A Wetsuit?

Simply put – NO! The water temp in Sri Lanka sits around the high 20s with the air temp around the same – so it’s boardies and bikini all the way. Yeeeewwwww!

The food at the surf house is pretty epic to be honest! A good of local and western style dishes.

Pre Dawn surf you’ll have fresh fruit and coffee/tea, breakfast ranges from traditional Sri Lanka dhal and hoppers to overnight oats (with a choice each day)  always with plenty of toast and fresh fruits on the side

Dinners include curries, fresh fish and even a weekly BBQ.

Tuesday and Thursday night dinners aren’t included, but the whole group heads out to a range of awesome restaurants nearby.

Overall I felt pretty safe in Sri Lanka – especially in the coastal areas. As with everywhere in the world (home included!) it’s a case of being sensible and not doing anything stupid. Don’t wander around alone after dark and don’t let your guard down just because you’re on holiday!

Solo female travellers be aware that you’ll always attract unwanted attention as a foreigner, so be on your guard and again be sensible. Check out these solo female travel tips in Sri Lanka for some more in depth advice.

The West Coast of Sri Lanka where the camp is based works from Oct to April with the peak surf season being Nov to April. However the camp also offers accommodation only options during the off season.

What if my partner/friend doesn’t surf or want to learn?

No worries! If you’re travelling with a non surfing friend or partner they can book the accommodation only option. Or if you’ve booked it with a private room they can come free of charge! They’re then more then welcome to join in camp meals/activities (at additional cost of course) or even do a singular surf lesson to try it out.

Is It Suitable For Solo Travellers?

Indeed it is! The triple rooms are ideal for solo travellers and the group brekkies and evening dinners are a great way to meet everyone and make some new surf buddies.

Do they cater for dietary requirements?

Indeed they do – I’m a veggie and was fed super well. Sri Lanka as a whole is an incredible place to travel as a veggie! They can also cater for intolerances and vegans too, just give them a heads up when you book.

So how much will your stay at the surf house cost?

I’ll be totally honest – this certainly isn’t the cheapest option in terms of Sri Lanka surf camps, but as I’ve already mentioned it’s a high end camp with top notch coaching. Their current surf packages and accommodation options are currently priced at;

Airport transfers are extra £60 for a car or £70 for a van (which you’ll need if you have boards). You can also arrange this independently at the airport for around £45, but you will need to barter to get that price.

Click here for latest availability and to book your spot!

So would I recommend the Ticket to Ride Surf House?

Well yes – I had an epic stay there and even a 2 week stint with their coaches really helped push my surfing skills further, plus they’ve given me the knowledge needed to take the next few steps too.

Admittedly yes it’s not the cheapest option for surfing in Sri Lanka, but if you’re serious about learning to surf the correct way or to build on your existing surf skills the value is certainly there.

The staff were amazing, the food was super tasty, the coaching was on point and the location is spot on too – what’s there not to like?

Click here for latest availability and to book your spot!

Are you heading to Sri Lanka for some waves soon?