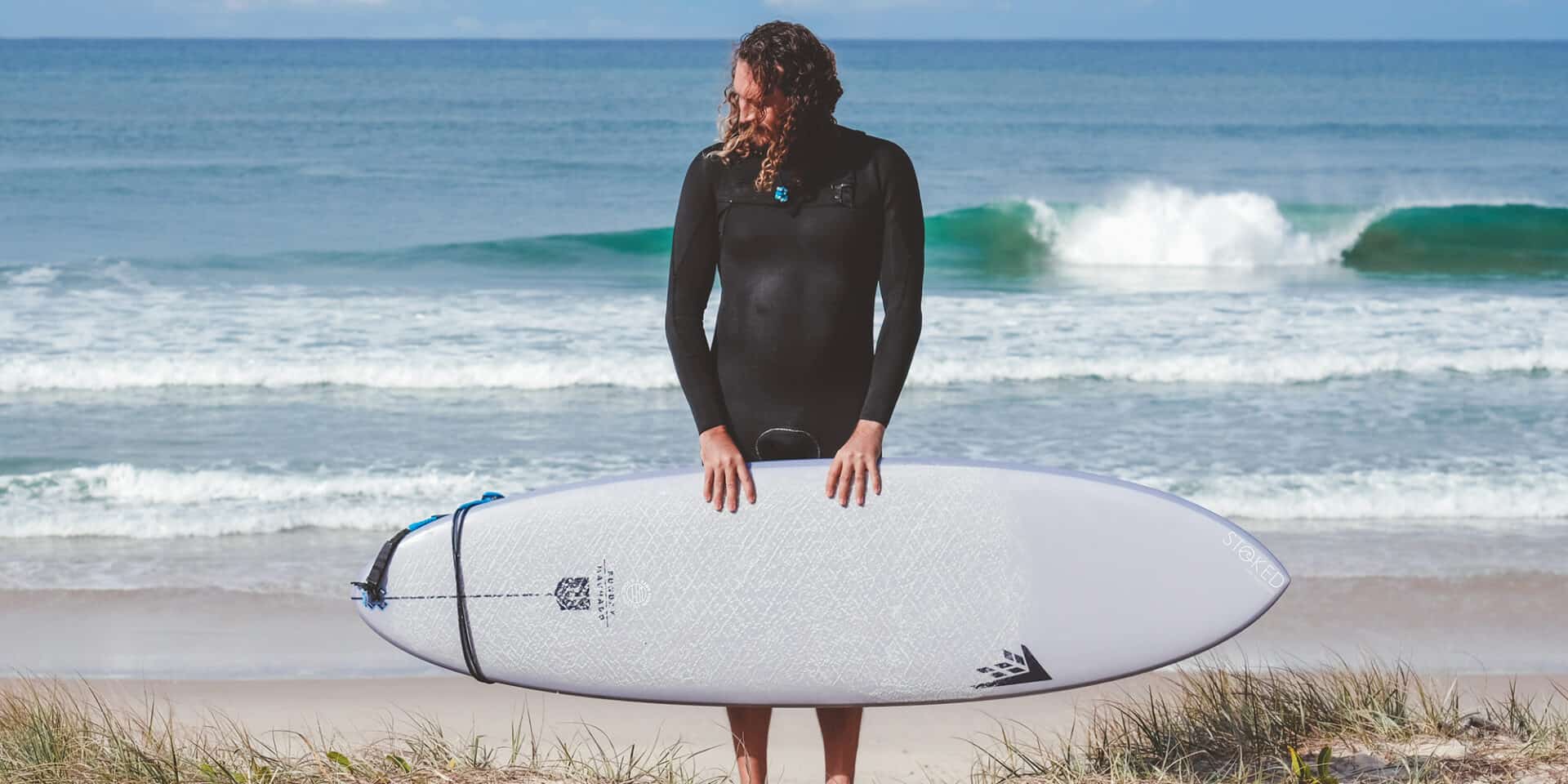 Weighing up epoxy surfboards v fibreglass boards? Well here are some of the key pros and cons so you can decide if they’re right for you!

When it comes to preferring epoxy surfboards or fibreglass surfboards, it’s a pretty polarising argument and tends to be a “marmite” conclusion – you either love them or you hate them!

A lot of peoples experiences (especially higher end surfers) are based on cheap epoxy boards or earlier epoxy constructions – if you fall into this category I definitely recommend testing out some of the latest epoxy options, the tech has come a long way in a short space of time!

One of the biggest advantages of epoxy surfboards is their strength and durability, which on the whole is way better than standard fibreglass surfboards.

This durability makes them a favourite for beginner surfers, surf shops hiring surfboards and people who just want something less prone to being dinged!

On the flip-side, one of the biggest disadvantages of epoxy surfboards is the price – and they come in at a higher price point than other surfboard constructions.

On the beginner side of things a solid epoxy board will set you back more cash than a standard soft top surfboard and when it comes to performance surfboards you can expect to pay at least $100 more for the same board in epoxy construction.

Firewire – who boast some of the best epoxy surfboards on the market – start around AU$1,000!

One of the advantages of epoxy surfboards is the fact they’re lighter than their PU counterparts. Now if you travel a lot with your boards (like myself) this is a huge plus as it cuts down your baggage weight!

On my last trip to Sri Lanka I took 2 epoxy boards and all my surf gear in a double board bag and it still weighed under 15kg!

Whilst being nice and light is an advantage for some, it’s also a disadvantage sometimes too! On windy, choppy days epoxy boards don’t handle great and can feel “chattery” underfoot – especially if you’re riding a performance shortboard.

Some epoxy models (like the Lost Lightspeed) do have an added bit of weight to them for exactly this reason, but on the whole epoxy boards aren’t the best in windy conditions.

Pro – Great To Travel With

The combination of light weight and durable means that epoxy surfboards are great boards to travel with!

Not only are you well within your baggage allowance (and I think we can all agree we hate excess baggage charges!) but they’ll be more likely to survive the wrath of baggage handlers too!

Although epoxy surfboards are on the whole really durable, when they ding it can be a nightmare! Not due to the fact they’re hard to repair (they’re about on par with regular fibreglass boards) but because they LOVE to soak up the water!

So if you do ding you board make sure you get it out of the water ASAP and dry it thoroughly before you repair it – else your board will quickly deteriorate.

On the whole epoxy surfboards tend to float bit more than their fibreglass counterparts, mainly due to the fact the foam core is different, the epoxy EPS cores are less dense than polyurethane.

This means in theory you can surf a slightly smaller, lower volume epoxy surfboard versus the standard one.

As a rough estimate an epoxy surfboard will feel about 1-2 litres more buoyant than the fibreglass version.

The flip-side of the buoyancy thing is that it can also be a downside too. Many peoples reluctance to migrate to epoxy surfboards is the fact they’re often described as “corky” and sit higher in the water.

Again this is something that for beginner and lower end surfers isn’t an issue, but is something experienced surfers need to keep in mind.

Some epoxy constructions, like the Lost Light Speed, are starting to bridge the gap though, bringing the feel of fibrelass in an epoxy board.

One of the often overlooked downsides of choosing an epoxy surfboard is the fact there isn’t quite as much choice as there is with fibreglass boards.

Although this might not be an issue at the beginner end of the spectrum, when it comes to more experienced surfers this can make things a bit more frustrating.

Not All Epoxy Surfboards Are The Same!

One thing that’s important to point out about epoxy surfboards, is the fact they’re not all built equal and quality, strength and durability do vary from company to company.

For me Firewire build the best epoxy surfboards, especially the Helium models like the Dominator 2 and Machado Sunday. Although I must admit the LFT construction isn’t as good in terms of durability.

The new Lost Light Speed construction is also another epic epoxy option – and probably the one I’d recommend those who usually prefer the feel of fibreglass boards.

Other brands on the other hand aren’t quite as good, and personally I really don’t rate the DHD epoxy build. I love the fibreglass options (and you can’t argue that DHD boards aren’t good, look at the amount of pros on them!), but the DHD epoxy models aren’t as durable or robust in my personal experience.

Have you surfed any epoxy surfboards?

Do you love them or hate them?!