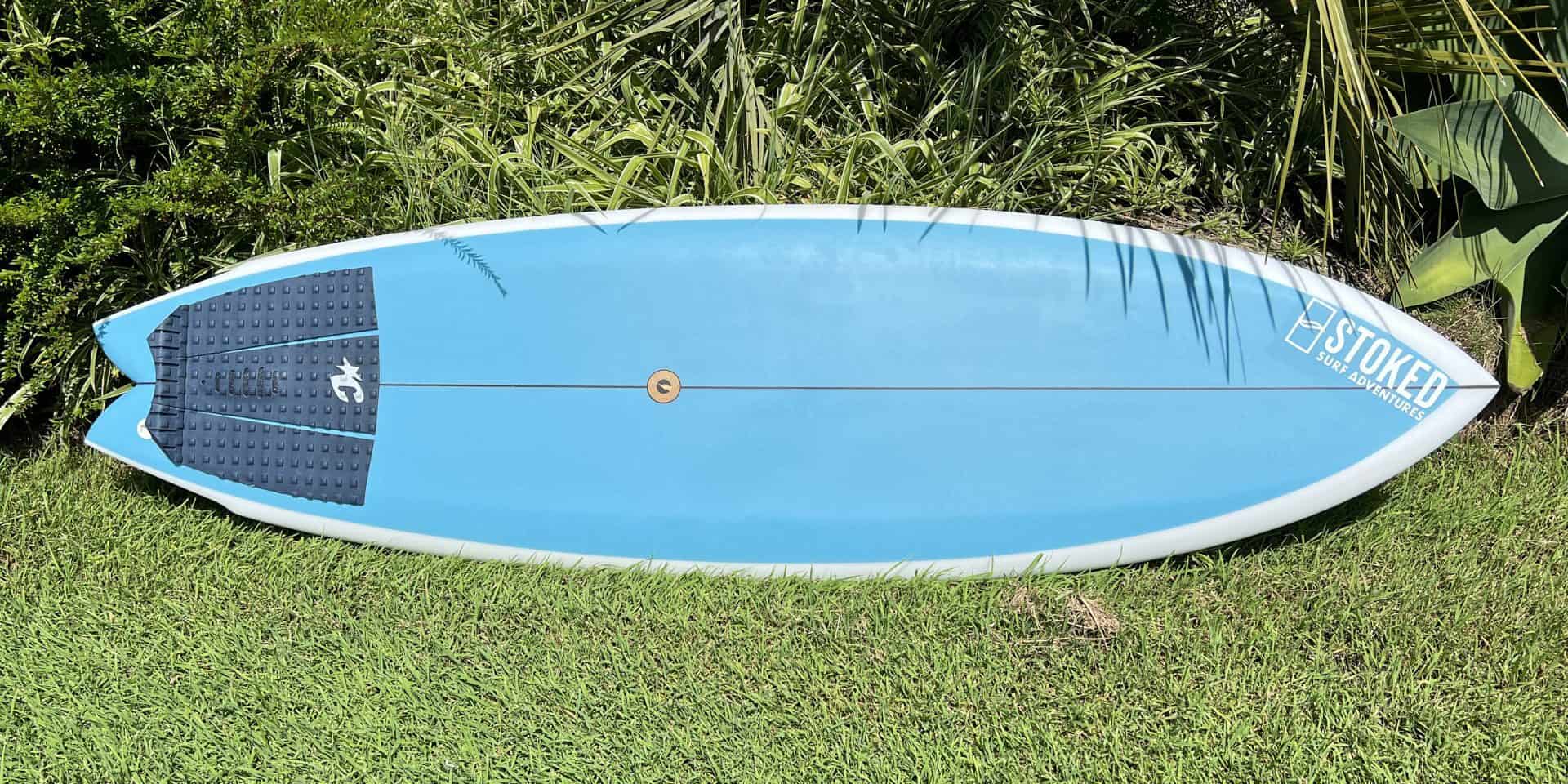 Intrigued by the style and performance of Album Surfboards? Here’s my Album Twinsman review which I recently picked up from Album Australia

Thinking about grabbing an Album Twinsman from the guys at Album Surfboards?

Keen to find out how one of the most sought after performance twin fin boards out there handles for the everyday surfer and not just the epic edits of Asher Pacey and Josh Kerr?

And of course whether they’re worth the huge wait time and high price tag?

I recently collected my custom Twinsman from the crew at Album Australia, and here’s how I’ve got on by the board that has put Album surfboards on the map..

Who Are Album Surfboards?

Recently Album Surfboards has also licensed production to Album Australia is now up and running on the Gold Coast as well as the original American shaping bay.

Album Surfboards have quickly become known for their style, performance and build quality – and if you ever get the chance to pick one up and look one over you’ll know what I mean, they’re a rare case where fashion and function mix perfectly!

The Album Twinsman smashed into social feeds everywhere when team rider Asher Pacey first started riding it and it quickly became his weapon of choice.

Recently though it’s ended up back in the limelight as Josh Kerrs go to board for a whole heaps of surf missions in Indonesia and the Mentawai Islands – where he showed the limit the Album Twinsman (and twin fins in general) can be pushed to!

It almost bridges the gap between thruster and twin fin – combining the best attributes of both into a board that can handle a huge range of waves.

Check out Matt talking through the board breakdown below for everything you need to know about all concaves, outline and construction of the Album Twinsman…

When it comes to people ripping on the Twinsmans Josh Kerr and Asher Pacey are certainly showcasing it’s best potential, with some recent footage of Coco Ho too.

Honestly though, if you want to see the full potential of the Album Twinsman this edit by Kerrsy will blow you mind and give you some serious wanderlust at the same time!

What Size Should You Get? 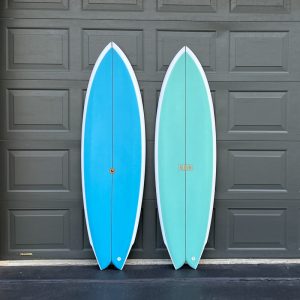 If you’re keen to order your own Album Twinsman getting the sizing right is key – you don’t want to make a mistake with the ridiculous wait time and pricing!

The crew at Album surfboards recommend opting for a few inches longer and a few litres bigger than your performance shortboard.

I tested out a 5’7 option I managed to grab second hand just to feel the board out, and although it was fun to ride it was certainly much to short and under foamed for me. For my custom order I opted for the 5’11, which comes in at just over 36L and that feels great.

My personal recommendation here would be don’t be afraid to add a bit of extra volume – it’s all well hidden in the turn down rails and as long as you don’t significantly oversize it, it wont affect the performance of the board.

Here’s the full run down of sizing as per the Album Surfboards stock dimensions: 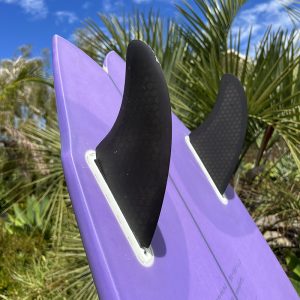 As a dedicated twin fin, you’ll ideally want to strap in a more upright set of twinnies to match the performance that the Album Twinsman is reknowned for.

Asher Pacey has collaborated with Shapers Fin on a twin fin set designed with the Twinsman in mind, so they’re the ideal option if you can find some in stock anywhere.

The Twinsman I rode was setup with the  Project Blank Twin Fin Pivot Set which are a similar template and they’ve been pretty epic – fast responsive and an absolute blast to ride. Save 10% off a set with the code STOKEDFORTRAVEL!

If you do opt for an FCS2 fin setup, the MR Twins or Power Twins are a a solid choice too.

Obviously the key thing you’re probably thinking right now is “what’s it like to surf”?! 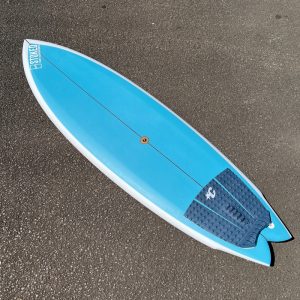 Well the first thing you’ll notice when you pick one up is how much volume is hidden inside the outline, thanks to the turned down rails.

The result is a board that surprisingly easy to paddle and you won’t find it difficult to up your wave count on one.

One you’re up and riding things get even more fun – heaps of drive, flow, speed and plenty of hold through your turns too.

What really surprised me was the grip this board had considering it’s a twin fin.

I took off pretty late on a punchy left hander on one of my first sessions, on the edge of the foam ball and was fully expecting that as a twin fin it was going to slide out and I was about to stack it. The tail held firm though and I found myself catapulted out onto the clean face – soo yeah, twin fin fun, but still with plenty of control!

Although the Album Twinsman certainly isn’t a grovellor it’s still plenty of fun in everything from chest high up and it’s going to quickly become your go to board for a huge range of conditions. I wouldn’t be hesitant about taking it out in bigger, punchier conditions either as this thing can handle pretty much everything you can throw at it!

Worth The Price Tag?

So, is an Album surfboard worth the price tag? Well with a stock, white model coming in at AU$1,100 and a tinted model starting at AU$1,300 it’s certainly one of the pricier surfboard brands out there, but the boards are beautifully crafted. 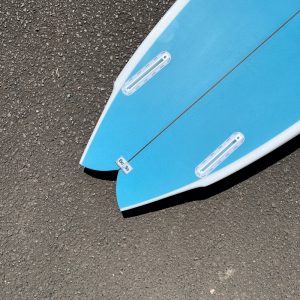 For me they sit beautiful in the spot where style and performance meet!

The only thing to be slightly wary of though, especially with Album Australia, is they’re using high performance Aero Blanks. Now on one hand they’re light weight and are epic to surf, but on the downside they aren’t as robust as other blanks and you’ll find that your board will certainly gain some serious deck compressions pretty early on.

This is especially true on the tail end of the Twinsman too.

For those looking for super high performance it comes as part of the trade off, but for the more everyday surfer – the durability and lifespan of the board is certainly something to consider when parting with that much cash.

And with that in mind I’d whack a tailpad straight on it to maximise the lifespan of it.

The bigger question here though is are they worth the wait?

Currently if you’re looking to order any Album surfboards in Australia you’ll have a min wait period of 4 months. However, I still hadn’t received my custom order after waiting over 9 months – which quite frankly is ridiculous, so I actually gave up waiting (even after contacting them numerous times to chase it) and ended up cancelling my order!

Luckily a few months later a stock one popped up in my sizing so I nabbed it. But stock drops are sporadic and limited, so you’ve got to be on the ball for that.

At the end of the day when it comes to style and performance you get what you pay for – and an Album Surfboard is going to be a gem in your quiver.

The Twinsman itself is a pretty unique board and as I’ve mentioned before, merges the best qualities of thruster and twin fin into a versatile, performance orientate and fun board that will handle pretty much everything you can throw at it.

My honest final thought though is given the softness of the blanks, price and huuuuuuuge wait for one in Australia (if you ever get one!) I’m not entirely convinced it’s worth it and there are plenty of other epic options out there that will get you in the water quicker and with a bit of extra cash in your pocket!

But still if you have the cash, time and infinite patience, the Twinsman wont disappoint. But I would certainly pay for a heavier glass job and a decent tailpad.

Have you surfed the Album Twinsman?

What are your thoughts on Album Surfboards?