Ever dreamed of living the van life? Thinking about taking on a Toyota HiAce camper conversion and heading out on some epic road trips?

Well during my time in Australia I decided to do just that and took an old Toyota HiAce and with a little help turned it into an epic tiny house to live the Campervan dream!

Where Did I Find My Van?

Well since I was based in Australia at the time the best place to locate a van to convert is Gumtree – where you can easily filter through ads by van type, make, price and of course location.

There are plenty of options out there – and if you’d rather get one already done up there are plenty of backpacker camper vans for sale on there too, as well as a heap of Facebook Groups for those selling vans.

How Long Did The Build Take?

Once I got started on converting the campervan the whole thing was actually pretty quick as I already had the layout I wanted all planned out – from the type of bed setup I wanted to placements of draws and even a hidden fold out desk!

With the help of Sean from SL Kitchens (an epic carpenter I hired to help out) the inside build took just over 4 days, with the solar installation (which I did a few weeks after) another half day.

So basically 5 days from start to finish.

What Was The Cost?

The overall cost for the build worked out just shy of $2,675

The solar setup I went for was then an additional $880 (a detailed breakdown of that is further on), + $100 for the roof bars

And on top of this the original purchase of the van was $2,300AUD.

All in My Toyota Hiace Camper Conversion was a $6,265AUD project

I went a bit mental and also spent around $150 on some pretty pricey black out curtains which I then got tailored to fit (since I have zero sewing experience and no equipment!) but you could easily cut that cost down!

On top of that I then spent money on bedding, LED lights etc – but your budget on that side of things comes down to personal taste.

I probably spent about another $300 with all the bits taken into account.

So an extra $450 of the overall cost was for the finishing, personalised touches

One of the 2 other splurges I made (which I was very glad I did) was the push to open draws on the main cabinet (which made everything flush and streamline) which were $17 a set (3 needed), as well as heavy duty runners for the back pull out draws – so I could store everything I needed for van life – which were $56 a set (2 needed).

This made them run super smoothly and stable, so I didn’t have to worry about how much I stored in them.

We even stood in the fully extended to test them out!

I then also added latches to all the pull out draws so they didn’t slide around whilst I was driving – which caused a heap of frustration to begin with!

Hiring Sean was certainly the best investment I made with the Toyota Hiace camper conversion – his expertise as well as the professional equipment made the whole process so much smoother.

Yeah I could’ve done the whole thing myself for much cheaper – but it would’ve been a LOT more stressful and ultimately it would never have looked as good!

Plus it would’ve taken a lot longer too!

His labour did set me back $1,200 which stung a bit at the time but honestly was the most sensible option and I don’t regret it in the slightest!

Well worth it though as this took me off the grid and easily handled all my charging needs.

In terms of the solar setup I went for, I decided to keep it as a closed circuit – which meant it wouldn’t effect the van battery in the slightest.

I also added in an inverter, so I could easily charge my laptop, phones, gadgets etc using normal plug sockets rather than USB chargers. It’s something I’d highly recommend but it did set me back around $200 of the total solar cost.

Plus I then wired in a 6 socket extension cable as my charging point and picked up a roofrack for $100 from the local scrap yard.

If I was to do everything again I’d also add in digital display to show the input, output and remaining charge on the battery just for peace of mind.

That being said though we kept heavy charge loads (like laptops etc) for daytime when the solar was producing heaps of charge and then the evenings we limited it to charging phones and powering the low energy LED lights.

What Would I Do Differently Overall?

Well I think the biggest thing I’d change would actually be the van itself!

Ultimately I would’ve gone for the high top, long wheel base version of the HiAce – especially if you’re looking at living in it long term.

The extra height certainly opens up a lot more options in term of storage but would also be heaps more comfortable. I’m 6 foot so bending over and moving around inside the van wasn’t the easiest task, especially once everything was shut up for the night!

In terms of building, I’d also have avoided using vinyl on the ceiling too. Although it looked great in the Aussie heat it became a freaking nightmare and all peeled off, despite using contact adhesive as a double up for fixing them on!

In the end I simply removed them all and replaced them with a painted wooden panel.

This ended up costing about $50 instead of the $300+ worth of panels I initially used on the roof!

I’d also try and get a van with sliding windows on the side too and install mozzie mesh on them – which would allow for a much cooler night time setup, especially in the hot summer months in Oz.

Want to see how me and Sean put everything together and how it all looked? Well I filmed the whole thing so hit play and check it out!

Are you thinking of undertaking a Toyota Hiace camper conversion?

Any questions about anything? 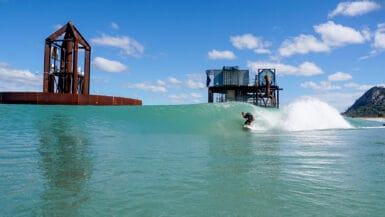 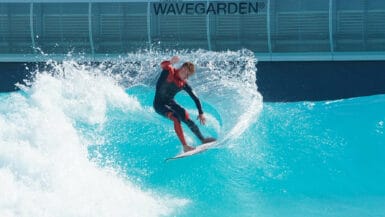 URBNSURF Wave Pool – Which Wave Option Should You Choose? 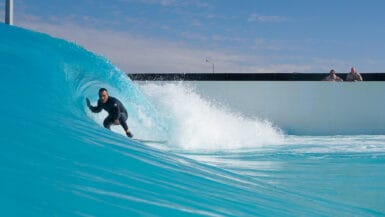 URBNSURF Wave Pool Melbourne – Everything You Need To Know