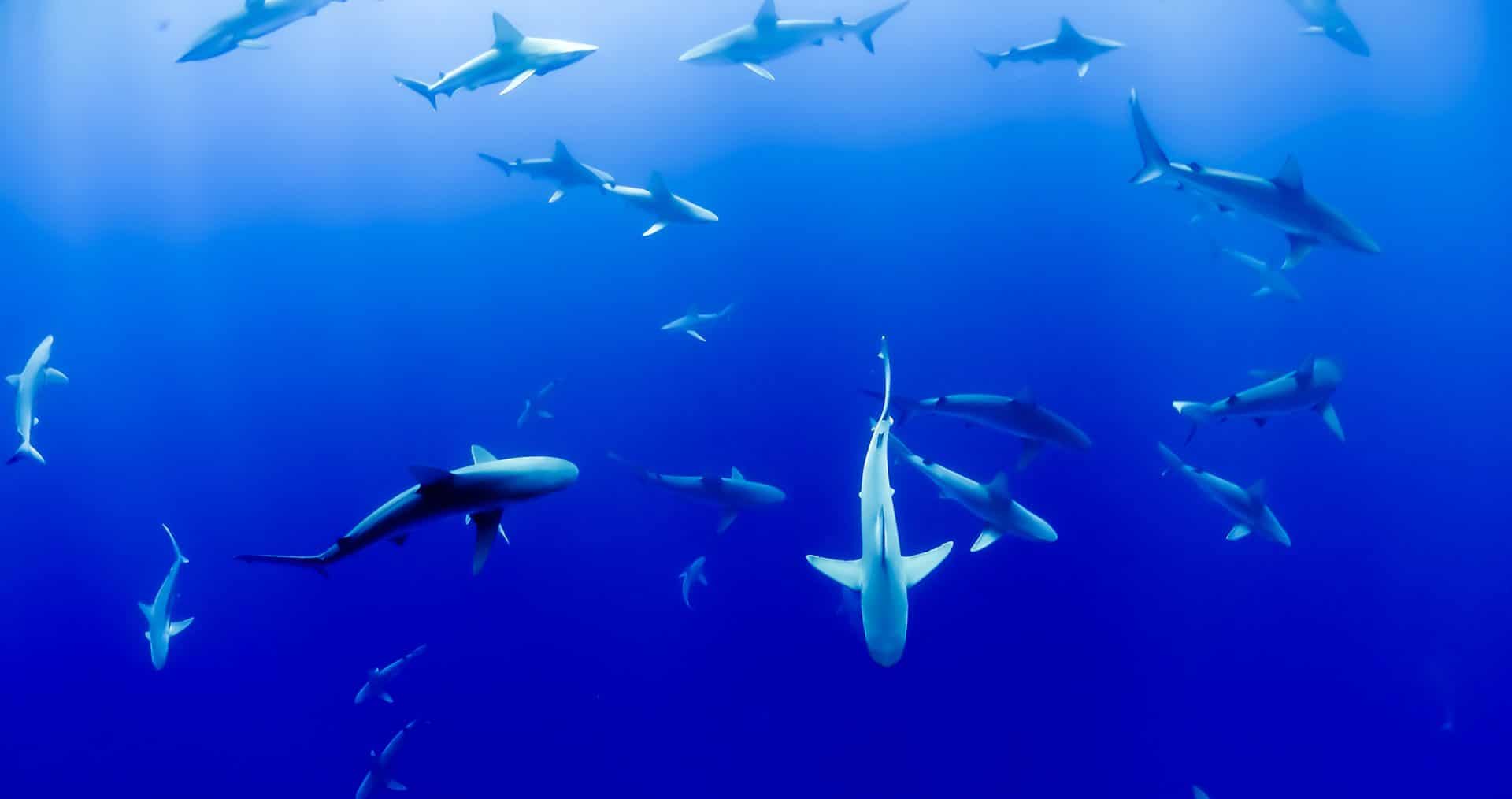 Sharks, Surfing and Scuba Diving – Is It Safe?

Love surfing and scuba diving but worried about sharks? Hopefully this post will help put your mind at rest and enjoy the big blue alongside them…

You don’t have to be a long term reader of this blog to realise I’m a massive fan of the ocean and spend a lot of my travels by the sea, on the beach or under the water.

Whether I’m freediving in the Philippines, scuba diving in Thailand or surfing in South Africa I’m most content when I’m surrounded by the big blue – it’s definitely my happy place.

For those who aren’t natural born water babies there’s always questions when I mention some of the stuff I do – “you really dive over 20m on a single breath?” or “isn’t surfing on a reef dangerous” but one of the most common things I get asked (and indeed a few readers have asked about it lately prompting this post) is about the men in grey suits…that lurking shadow in the depths…sharks.

Now I’d like to warn you from the word go that I’m massively bias about sharks, I genuinely think they’re wonderful creatures, highly misunderstood and I hate the fact mainstream media has cultivated a stereotype of blood thirsty killers intent on consuming everything in their path.

So I thought I’d explain some stuff about my personal experiences with sharks whilst travelling and hopefully put your mind at rest and let you enjoy the ocean a bit more!

Jaws, media coverage of attacks and the fact their the oceans apex predator have all helped craft a very evil and unfair stereotype of the shark as a cold hearted killer.

People are naturally afraid of them – which is understandable – but the reaction to and basis of this fear isn’t on par with the “threat”.

Having a degree of fear of sharks out of respect for their evolutionary peak is fair enough – they are of course the ultimate predator and have thrived in the worlds oceans since the times of the dinosaur.

Unfortunately respect isn’t what most people have for what is an incredibly important part of the food chain and millions of sharks are needlessly killed each year – for traditional medicine (don’t get me started on that rant!) but now in places like Australia because they’re seen as a threat.

Let’s face it this threat is a very natural one. As humans we are primarily land dwellers, we are arguably the apex land predator (albeit a very dillusional and dysfunctional one).

The shark is on the ocean food chain where the human is on land, top of the pile.

But let’s flip everything on its head, what if sharks were on par with humans in so called intelligence, what if they then decided to venture onto land which would result in them being killed?

Would you simply accept them all grouping together and coming onto land to kill a heap of humans simply because we were a threat to them?

Of course not, so why we feel we have authority to voluntarily venture into their domain and punish them for a few isolated incidents that happen in their territory is beyond me.

It is us that have stepped over the line, not them.

Anyway I’ve digressed a bit from the point of the post but let that thought sink in for a moment and it will help you understand where I’m coming from.

Many places I travel to and explore the oceans of have a solid shark population.

Whether it’s diving on the Great Barrier Reef in Australia with black tip reef sharks, island hopping in the Galapagos with hammerheads or surfing in South Africa which is the home of many great whites I’m still drawn to the water, it’s an inevitability of my lifestyle and you’re hard pushed to find any body of water that doesn’t contain sharks!

Yet I still jump in, descend, paddle out and enjoy myself.

Why? Because I know from personal experience that sharks aren’t the senseless killer many people believe them to be.

I’ve been lucky enough to have had numerous encounters with sharks on the road, some voluntarily, some by chance. Some welcome, some not so much!

Scuba diving has been the main source of my interaction with sharks, most of which have been specific shark dives, so I went in knowing full well what was going on!

No matter what the species – grey nurse sharks in Byron Bay, 7 Gill cow sharks in Cape Town, black tip reef sharks in Thailand or night diving with nurse shark in The Maldives – one thing sticks in my mind about my encounters, the beauty.

Watching a shark silently glide through the water is simply put – majestic.

The way they move, their shape, their character it’s all besutiful to watch.

At no point did I ever feel threatened and each time I’ve left with a bigger respect and intrigue into these amazing creatures.

Even when I caged dive with great whites in South Africa I surprised myself with how calm the whole thing made me feel. Even as the 4m long male circled the boat the adrenaline was one of excitement, not fear.

Being on their level, in their home is something I highly recommend trying out!

On the flip side surfing has provided very little in the way of shark encounters but my feeling about them is very different.

A little bit of science for you all now, sharks usually attack upwards, using their speed to surprise their prey.

As a surfer I’m sat on top of the water, with the unfortunate coincidence of looking very much like a seal – the prey of a few big shark species!

Now with that all into account surfing with sharks is a whole different kettle of fish than diving, yet I still paddle out – sometimes in some very sharky spots, because some of them are the best breaks in the world!

Do I feel nervous?

Yeah I’ll admit sometimes I do, but this feeling usually subsides as I catch a few waves and settle into the session.

I’ve spent years surfing in spots like Australia and South Africa which are frequently labelled as “shark attack hot spots“.

But even with this amount of water time I’ve only ever seen 3 sharks whilst surfing, neither of which even remotely looked poised and ready to kill (despite one of these times involving a rather large great white!) and I simply paddled out of the water slowly and calmly.

Even with my recent surf trip to South Africa with Ticket To Ride I felt safe.

Sure when I was surfing in Muizenberg the shark alarms went off – multiple times in fact – but each time within 30mins we were usually back in the water carrying on the session.

The first time it went off yeah I was bricking it a bit and paddled out pretty fast, but despite the huge volumes of people in the water the shark came no where near us, we didn’t see it and no one was attacked.

So I paddled back out at the same spot and surfed their for the next 2 weeks with hardly any worries.

Even still I definitely prefer being under the water than on top of it when it comes to sharks!

Check out this awesome PDF download by @SharkGirlMadison – even though it’s focused on Australia there’s some great tips for surfing in sharks areas in there.

But let’s face it all of the above situations were a calculated risk, I knew that there were sharks in the water but I still voluntarily chose to put myself there.

Here’s some fun facts for you – the following animals kill HEAPS more humans per year than sharks;

Do you know how many people are killed by sharks each year? About 6.

That’s a ridiculously small number in comparison to the millions of people enjoying the oceans all over the world!

But do you also know how many sharks PEOPLE KILL EACH DAY– roughly 10,000!

Now take a look at these stats on other situations more dangerous than being in the water with sharks;

EVEN COCONUTS are a bigger threat to your tropical holiday than a shark!

The other thing with sharks attacks is many of them share common traits – such as being near a natural food source (such as a seal colony) or being in the water during peak shark hunting periods (usually sunset or sunrise) so avoiding these key elements is a no brainer.

But it’s a respectful fear and I also accept that like many of the most fun things in life there is always an element of danger, it’s about calculating that risk.

The risk of me being attacked by a shark is indeed there, but as a numbers game it’s very much in my favour.

That’s not me being blind to the danger, just accepting the terms of what I do.

And if I was to get stacked would I blame be sharks?

Would I demand authorities hunt down the one that potentially attacked me?

No – because that’s not how life works, despite what many people think.

Would it stop me surfing or diving? I’d hope not.

Sharks are beautiful creatures and for the most part they have a bigger fear of humans than we do of them.

I urge you not to allow your fear to stop you enjoying the beautiful environment they call home, that it doesnt stop you experiencing the numerous water based activities I enjoy on the road.

Instead I hope you look at the facts and don’t get sucked into the media fear mongering.  If you’re unprepared to take the risk based on that then no worries, but after all you’re statistically more likely to be hit by a car whilst reading this post on your phone than you are to be bitten by a shark whilst surfing!

You don’t have to love sharks, just make an informed decision and see if the risk is worth the reward…and in my experience it definitely is.