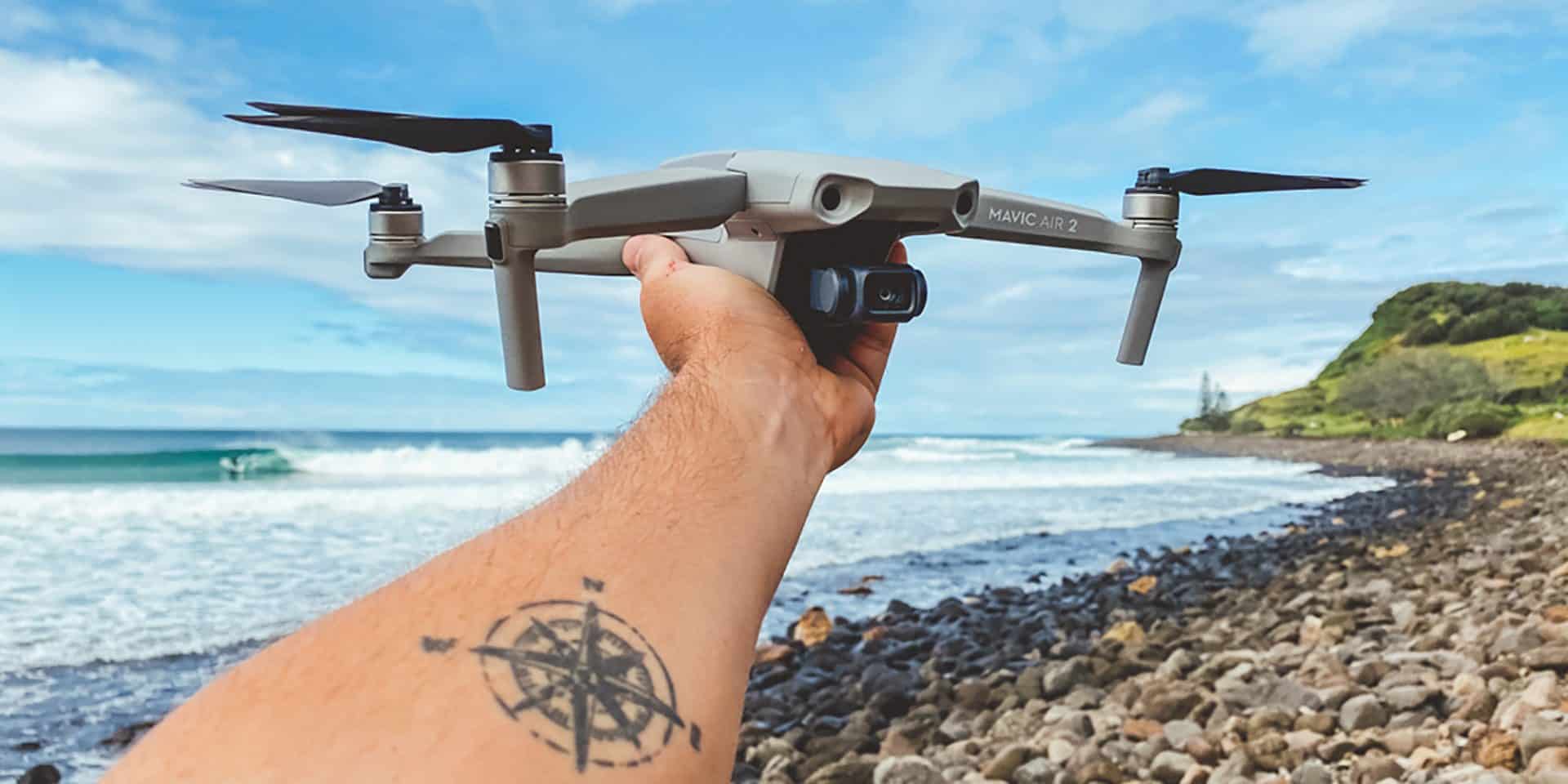 Eyeing up the new Mavic Air 2 and trying to figure out if it’s the best drone for travel? Here’s my DJI Mavic Air 2 hands on review – the good and the bad!

Eyeing up the new Mavic Air 2 and trying to figure out if it’s the best drone for travel?

After getting hold of DJIs latest drone offering here’s my Mavic Air 2 hands on review –  how its handled life on the road, why I upgraded form the original Mavic Air and a few negatives you’ll need to consider too…

Ok first things first – what are the new stand out features of the Mavic Air 2?

Why I Upgraded From Mavic Air

First off 4K @ 60FPS was one of two biggest reasons. I love having the ability to slow mo things down (especially action shots) and the ability to do this in 4K is a great tool to have. It now also means I can shoot the same frame rates across all of my travel camera gear too.

The second is the fact that the Mavic Air has nearly double the flight time of the original Air – up to 34 minutes in the air, which is insane!

The new controller has OcuSync 2.0, which means stronger signal and less drop outs when flying. Although 90% of the time the signal on the Air was no worries, I did have some issues with controller signal as well as video transmission whilst flying.

Since flying with the new controller (in some of the same locations) I’ve not had any issues.

The final major reason for upgrading is the sensor. From a photography point of view even though the 48MP photo boast seems like it would be a huge deal, it’s actually the upgrade to a 1/2 inch sensor that was another big push for the upgrade – clearer images and better video.

So what are my first impressions on the Mavic Air 2 after using it for the last few weeks?

It’s a much smoother flight v original Air – from the take off to actually flying it’s super smooth and responsive, especially with the Follow Me Mode activated, which is great news. 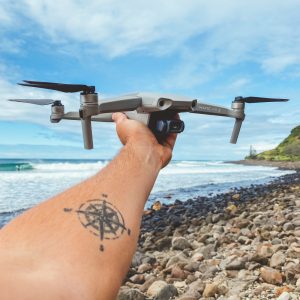 On the flight front too it’s super noticeable how much quieter the Air 2 is as well. This might not seem like a big deal for most people but if you’re trying to fly a bit under the radar so to speak it’s a much welcome tweak and just drawing less attention to yourself when flying is never a bad thing.

The battery life is epic! Having nearly double the flight time over the original Air is absolutely nuts and certainly gives you a lot more leeway to setup shots and really takes the pressure off too. All my flights have been around the 25 minute mark with plenty of battery left over.

4K @ 60 FPS is an amazing tool to have. For someone who shoots a lot of surfing and also loves a nice slow mo travel sequence this is now my go to video setting and certainly one of my favourite aspects of the Mavic Air 2. 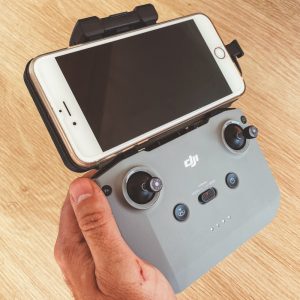 I’m loving the new remote. I must admit I was dubious about it when everything was first announced (as the Air remote is super compact and foldable), but the new one feels really solid in the hands and the top mounted phone mount makes waaaaaay more sense!

Despite the Air 2 being bigger and heavier on paper (570g v 430g) I actually didn’t notice a huge difference. The whole package (inc remote, drone, 3 batteries and chargers) packs down really well and wont actually take up much more space in my carry on luggage. Great news for travellers.

On a side note as well the included bag has a much better construction over the other DJI bags I’ve had. The new material looks like it’s going to be super durable and slightly weather resistant too.

Also the layout of the internal and external pockets makes it ideal for storing cables, filters and other useful accessories – although admittedly I did enjoy the battery slots on the original Air bag, which the new one does lack. 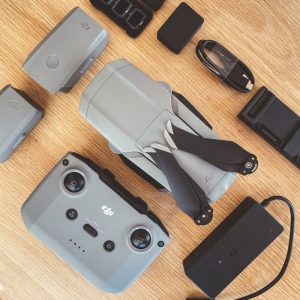 What else do you get with the Fly More Combo? This is all in addition to what you’d normally get with the drone only option;

So for the $189 price difference you nab an extra $495 worth of gear and to be honest the extra batteries and case (which I’d advise buying anyway) more than cover that cost as they’d set you back $319 on their own!

My advice I you’re serious about using this drone a lot, the extra money on the initial purchase is well worth it.

Larger size and weight drone (from Mavic Air) – however as I’ve mentioned this is barely noticeable and it all packs down into a really compact package.

Larger size and weight remote (compared to Mavic Mini, Air and Pro series) again the overall package is really compact so it’s not as big a deal as I first thought

BUT the trade in size is well worth the vastly improved flight time and remote reliability! 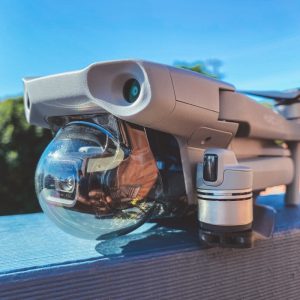 The gimbal cover. Now I love the fact that DJI include a gimbal cover with most of their drone now, but I must say I really dont like the one on the Air 2! The original Air had a really nice, clean cover that was super easy to clip on and off and had minimal room for error.

The Mavic Air 2 one of the other hand is really quite fiddly to clip back on and I can see it being super easy to damage the gimbal itself if you mess it up. Fingers crossed a third party will release a much better design ASAP!

The ND Filters. The Fly More Combo comes with 3 bundles ND filters which does seem like a solid option. They come in at ND16, ND64 and ND256 which I get the reason for as they’re pushing the Hyperlapse, Nightlapse and long exposure modes on the drone.

I feel that the average user could do with a ND8 in there though as it would be much more useful. It’s also. bit puzzling why the standard filter on the drone is simply a frame – rather than a UV lens to stop scratches etc.

I must admit I’ll be hunting around for a set of Polarising Filters pretty quickly though as they’re a must for shooting over water and beaches – fingers crossed PolarPro bring out a set rather quickly.

DJI Fly App – currently this is my biggest downside of the Mavic Air 2! The swap from DJI Go App to the new DJI Fly App (which is also the flight app for the Mavic Mini) means I have lost control of certain settings, most notably the yaw settings to tweak the responsiveness of the drone and camera for more cinematic effects.

It also seems you can no longer turn off the landing sensor either which is a much bigger deal as this make hand catching (which I use a lot for beach shoots and off of boats!) so much more difficult to achieve safely.

Overall though the new app is actually really clean and easy to use so fingers crossed these issues are quickly rectified with an update to the app/software.

Lack of backup IMU. Ok so lets get a little more techy here! The original Mavic Air and many of the other DJI drones come with a backup IMU – basically the bit that controls the drone and keeps it from flying away uncontrollably!

Now the Mavic Air 2 only comes with a single one (presumably to cut on weight and costs) and although tech has improved heaps recently not having a fail safe is a puzzling move by DJI. Something to keep in mind.

Ultimately, none of these negatives is a deal breaker and they’re simply small niggles I have – all of which are hugely overshadowed by the positives! But it’s worth being open and transparent about these things though hey?

So on Aug 9th DJI dropped a firmware update (v01.00.0340) which enabled some awesome new features on the Mavic Air 2! So what do those include?

The biggest part of the update took most drone enthusiasts completely by surprise and enabled a 2x digital zoom feature on the Mavic Air 2, which is a really massive update and great tool to have.

Overall this is a really good option to have – especially if you want a tight shot but don’t have the flying space to achieve it.

It was one of my personal negative about the Mavic Air 2 when it launched, but this update (along with the DJI Fly App update) has reinstated the advanced gimbal controls for the Air 2 – including my beloved yaw settings!

So for anyone who wants complete control over the camera and gimbal capabilities, happy days indeed!

Hyperlapse has had some upgrades and you can now use up to 45 waypoints to create some epic effects. Not only that but you can also map and save the route, bring the drone back, load a new battery and then reload the points on a fresh battery for ultimate peace of mind.

Within the updated are also some obstacle avoidance tweaks and controls. Although they vary between flight modes it basically allows you to disable or enable different responses in obstacle control. The most notable is being able to turn off sideways movement in obstacle bypass.

Why The Mavic Air 2 Is Ideal For Travel

So why is the DJI Mavic Air 2 the perfect drone for travel?

Well pretty much all of the key upgrade features really!

The flight time gives you the flexibility to create a range of shots during each flight and really take the extra care to set everything up correctly without having to rush, which is going to to be a huge advantage of any of the other travel drones like the original Mavic Air, Spark and Mavic Mini.

4K @ 60FPS – perfect for those slow mo sequences, especially for action shots, which will make your travel videos that much better. You can also shoot super slow mo (up to 240FPS), but at lower resolutions.

The Extra Size Is Worth It (And Barely Noticeable)

When it comes to size, although the Air 2 is bigger and heavier than the original Mavic Air or Mavic Mini the trade off in spec is well worth it and isn’t going to weigh you down heaps.

You’re still going to be able to chuck it in your carry on for flights and take it on all those epic day trips you want to capture!

Everything I Loved About The Air – But Better!

For me the original Mavic Air was the perfect drone for travel at its launch – sure it had some trade offs against the Mavic Pro lineup but the sheer size and weight was a game changer. Mavic Air 2 has set the bar even higher and really bumped up the specs and taken an already incredible travel camera to the next level.

Sure you could save money by opting for the Mavic Mini, but you really limit your flight time and specs for both photo and video, so if you’re serious about getting a solid drone for travel the Air 2 blows it out of the water and is well worth the extra money.

The bottom line is I’m absolutely stoked with the Mavic Air 2 and it’s going to be my go to drone for travel from now on in – looking forward to capturing heaps of travel chaos for you all with it!

And of course as I continue flying it I’ll update this review with any new things I come across too!

Click here for more info on the Mavic Air 2 and to buy yours!

What are your thoughts on the Mavic Air 2?