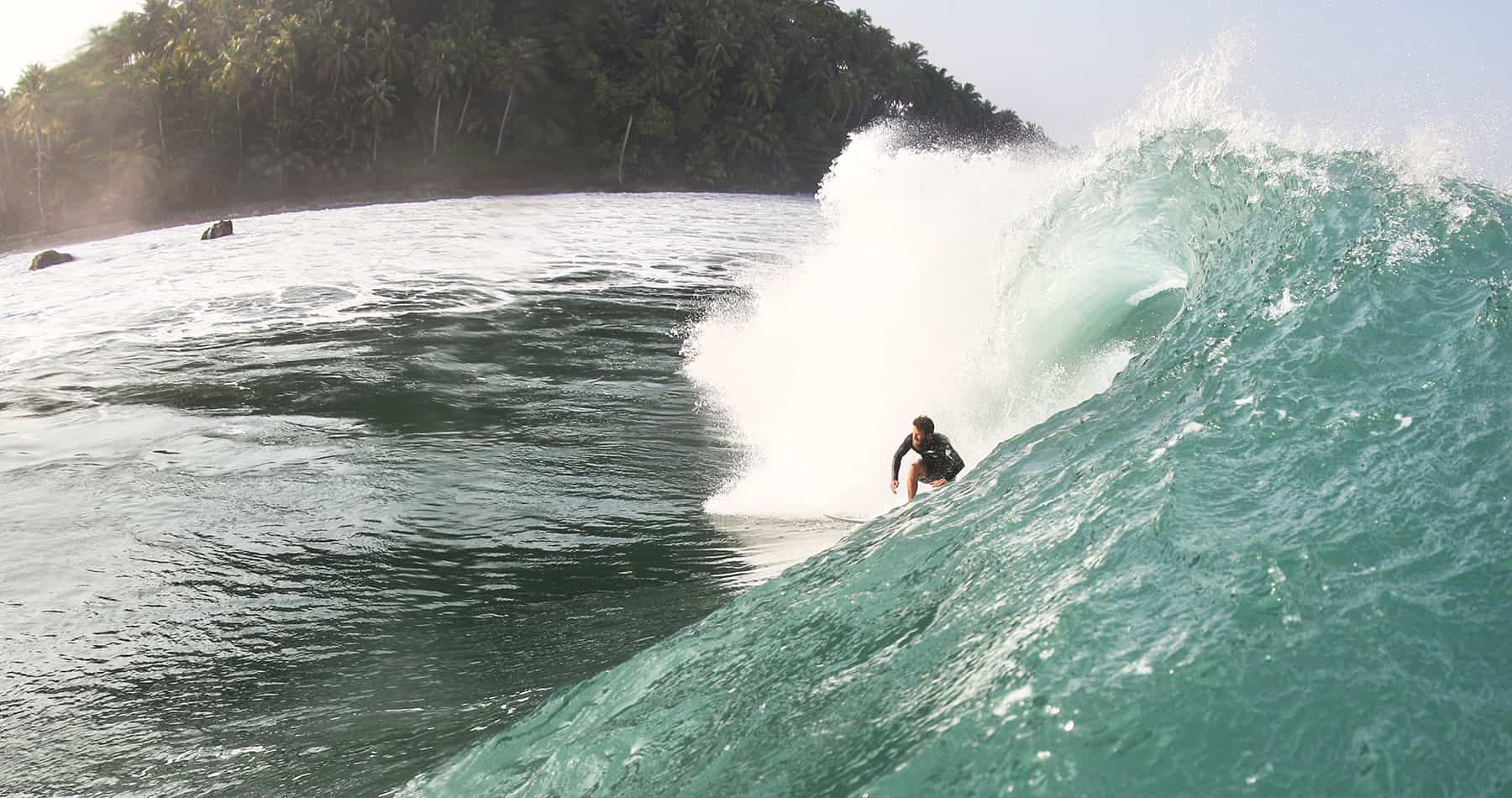 If you’re looking for perfect waves and tropical island vibes then you can’t go wrong with a Mentawai surf trip! And if you’re on the hunt for the best Mentawai surf spots here’s a run down of some of my personal favourites.

Probably the most picturesque surf spot in the world – this right hander breaks in front of a huge palm tree forest – so if you’re looking to score an Instagram worthy shot but aren’t tucking into barrels yet, this is the place to head!

Best surfed in the shoulder season (due to the wind direction) Burger World can absolutely reel on the right conditions, with plenty of opportunities to smash the lip.

The first section can also offer up some fun barrel rides too when the swell picks up, so keep an eye out.

It’s a swell magnet in the low and shoulder season, so if the more popular spots aren’t breaking expect a bit of a crowd here.

Barrelling = Only on a big swell 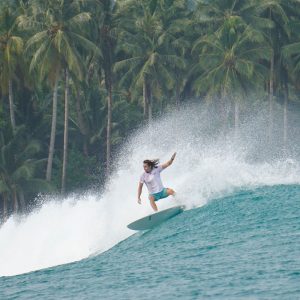 I wont lie, this is easily my favourite wave in the Mentawais and the one I’ve spent the most time surfing!

A super fun, cruisey left hander Beng Bengs breaks over a pretty forgiving reef and offer up lots of opportunity to practice your turns.

That being said, when the swell jacks up Beng Bengs can produce some extremely fun and long rides – just make sure you kick out before the close out end section which can get REALLY shallow!

As one of the best wave magnets in the area if the swell is small Beng Bengs will still have something rideable, but as a result it can attract quite a crowd.

Sat in front of Pitstop Hill surf camp Pitstops is just around the corner from Ebays and offers up a right hand alternative.

Quick and hollow on the take off it’s a fun, yet punchy wave. It’s not the longest option in the area, but its proximity to quite a few surf camps means it’s increasingly popular and a good option for high end beginners looking to practice their reef surfing or backhand.

For those regular footers it’s a playground for cheeky cover ups and some good, puntable sections if you want to practice your air game too.

Hazards = Shallow if you’re caught on the inside

A super consistent right hander suitable for intermediates and up – 4 Bobs is a great alternative if spots like Beng Bengs, Ebays or Pitstops aren’t working.

The fun wall offers heaps of opportunity to practice your carves, turns and aerials and is often described as the wave equivalent of a skate ramp!

It works on a huge variety of swells and due to its more playful nature is a favourite of intermediates surfers, but experienced watermen will enjoy it as an epic warm up wave too.

If you’re on the hunt for something super mellow – especially if you’re surfing a longboard or Mal – then Playgrounds is as fun as it sounds!

This long, playful left hander is a great alternative to 4 Bobs (which tends to get a lot busies and is a favourite for regular footers) and offers up some great walls to cruise along, although it does get a bit speedier when the swell picks up too.

If you fancy mixing up your session there’s also a right hander breaking here too, although it’s certainly less lengthy. 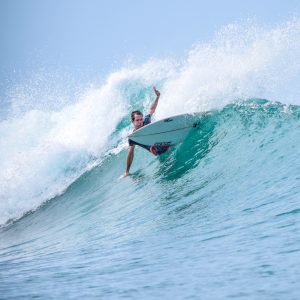 This break does exactly what it says on the tin – a super fun left hander that is full of good times!

Working on a variety of conditions its a great left hander alternative to Burgerworld if you get bored of going right.

On smaller swell this is an epic spot for those surfing logs or maps, with long mellow walls to carve up – however it can hold a good chunk of swell too and certainly becomes a more advanced spot in the right conditions. 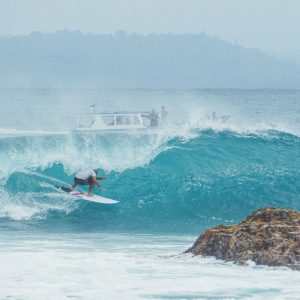 Recognisable by the iconic 2 rocks which sit on the inside of the lineup (make sure you don’t get caught out by the after a wipeout or on smaller days!) Ebays is another popular left hander suitable for intermediates and up.

It’s pretty fast so once you make the drop get a few quick pumps in to make sure it doesn’t out run you – but if you lock in and it reels all the way to the inside you’re in for a treat!

When the swell picks up this has one of the most fun barrels in the area so grab some rail and enjoy.

There are quite a few Mentawai surf camps close to the point – including Beng Bengs and Driftwood – so it can gather a bit of a crowd, especially when it’s breaking at a fun size. This will certainly thin out when it pumps though and the fast, hollow barrels are best left to the more experienced surfers.

Barrelling = Yes on a bigger swell

This quick right hander – sitting in front of MIA surf camp – is great fun and one of the more consistent waves in the Mentawai, especially during shoulder and low season.

Offer a few peaks along the reef it has a good mixture of fun , rippable walls alongside some cover up sections too on the right swell. Depending on the direction it can be pretty fast to make the first few some get that speed going!

It’s also pretty sheltered from the wind, so if other spots in the area are blown out or onshore, Nipussi will usually still be surfable.

Barrelling = On a bigger swell

Hazards = Shallow if you get caught on the inside

Best Time To Surf = All tides

For chargers sit deep and tuck into the fast, hollow barrel section and enjoy the ride. If you’re not as experienced (don’t underestimate the wave, it’s advanced surfers only!) you can sit further down the peak and avoid the more challenging sections.

On a smaller swell the barrel is certainly more intermediate friendly, but still proceed with caution.

Wherever you sit make sure you kick out before the final section else you’ll get an absolute pounding!

At low tide this spot is pretty much unrideable due to the coral shelf it breaks over, so get there on the mid to high tide to avoid getting cheese grated on the reef!

It’s also an in water photographers delight, with super clear water for some amazing shots.

Hazards = Crazy strong currents, super shallow on the inside

Situated further south (off Sipura Island) than most surf spots on the list (which admittedly are mainly situated in the Northern Mentawais), Telescopes is a long, barreling left hander but on a smaller swell Telescopes can also be a super fun wave even for intermediate surfers.

As with most spots in the Ments though, once the swell starts pumping this spot can handle it and becomes advanced surfers only.

…if you do happen to end up here in the right conditions it’ll be one of the most perfect waves you’ve ever laid eyes on.

Hazards = Can be shallow

Sitting in front of the surf resort that bears its name, Macaronis is widely considered as one of the most high performance waves in the world, but also one of the funnest too!

Situated off the island of North Pagal this reeling left hander offer both open, hollow barrels followed by a fast, fun wall section ideal for smashing down some serious turns or punts.

Surfable on all tides in a. huge range of conditions it’s one of the most consistent waves in the whole of the Mentawais.

Best Time To Surf = All tides

Sitting in front of the luxury surf resort of Kandui – Kandui Left is easily one of the most famous waves in the Mentawais.

It’s the place to head if you want to charge big barrels or simply sit on a boat in the channel and enjoy the show!

This wave is fast, precise and punishing if you get it wrong, so if in doubt DON’t paddle out – this sot has certainly inflicted some serious injuries on those not up to the challenge.

But if your skill level permits get ready for some absolutely perfect barrels which will reel along the fringing reef – the perfect way to escape the blazing Indo sunshine!

Big, challenging, fast and hollow – if those are all words that you aren’t comfortable with then leave it to the experience surfers, watch and learn!

A mirror image of its left hand counterpart at Kandui Left, expect more of the same – with long, open barrels freight training along the reef.

Again expert surfers only – and if you’re not up to the task it’s best to kick back with a cold Bintang and enjoy the show instead!

As with Kandui Left it sits right in front of the luxury surf resort.

If you like going right and grabbing rail straight into a deep, fast barrel then you’ll love Bank Vaults.

It’s consistency makes it a favourite for those on the hunt for a tube filled session and when it glasses off it’s an absolutely stunning wave to watch or surf – so get your camera at the ready if you’re not paddling out.

You’ll either be making an epic withdrawal exiting the barrel or a hefty deposit of skin if you get caught on the reef – so steer clear if you’re anything but advanced!

Pheewwwww and there you have it – some of the best surf spots the Mentawais have to offer! Time to get your board bag all packed up and start planning your trip to this surfing paradise!

Check out my full Mentawai Island Surf Guide here for all the info you need – from where to fly into, the ferry times and a range of epic surf camps and surf charters!

What are your favourite Mentawai surf spots?