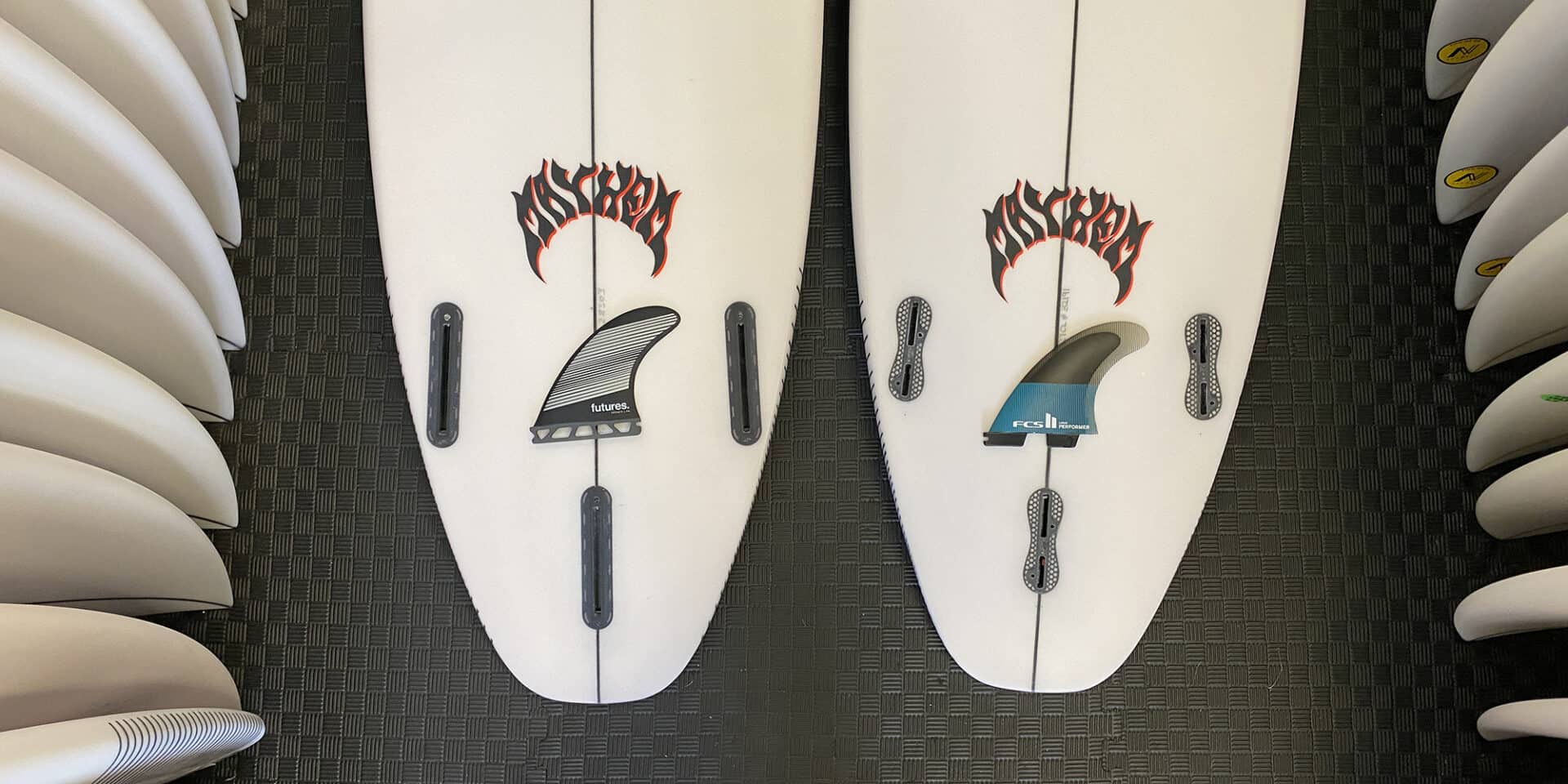 Trying to figure out the best surf fins for your next board? FCS2 v Futures fins, which is better? Here are 5 reasons I made the swap….

When it comes to picking surf fins there’s a lot to think about.

But one of the most dividing questions is which fin box to choose – FCS2 or Futures fins?

Having ridden FCS fins for years I’ve recently made the switch to Futures surf fins – and here are 5 key reasons I made the swap, and something you should consider too…

Oh and it’s worth pointing out that I’m in no way affiliate with Futures and this isn’t an ad. Just honest, unbiased advice based on my own research and experience!

Futures vs FCS2 – An Overview

When it comes to dividing surfers and starting a heated debate the “FCS or Futures” questions also result in very polarised opinions. But if you’re looking for your first surfboard or debating making a swap between the two, what’s the main difference between the two fin box setups? 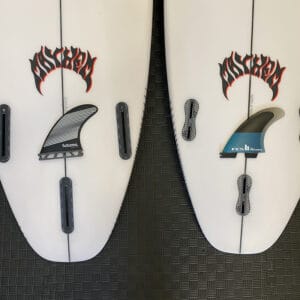 Both fin systems are widely available in most board brands and models and both have a huge range of surf fins to choose from, so lets get down to why I’ve ditched off FCS2 in favour of Futures….

The first major reason I made the swap from the FCS2 surf fin range to Futures fins was the security of the fin. Yes, FCS2 market themselves on their tool-less fin system (more about that in a bit!) but the trade off is the fact that they can be knocked out pretty easily. 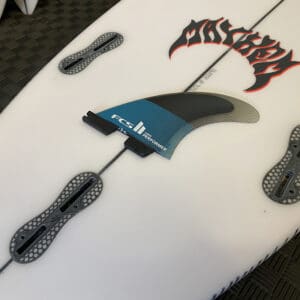 Having worked in a surf shop I lost track of the amount of people coming in to buy a new set of surf fins because they’d clipped one of the fins and it had popped out. Seriously, numerous people per week having to drop $100+ because getting spare single fins is a nightmare!

Futures fins on the other hand, with their one tab, single screw system take some punishment before they snap out and very rarely get knocked out.

….well if I’m taking the time to screw each fin in then you loose the only real “benefit” of the FCS2 fin surf fins and you might as well be riding Futures fins!

Along the same line as fin security is the fact that if you think of it logically, the Futures fin box just makes more sense – both in design and also practicality for surfers. 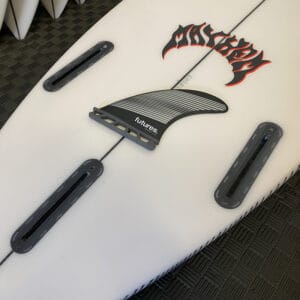 If you get pushed backwards on a surfboard (get sucked back on a duck dive or with a bit of current) and hit an object or the sand, your fins aren’t really in that much danger – you’ll be travelling at low speeds and really aren’t going to be travelling in that direction much.

If however, you hit it whilst travelling forwards, the chances are you’re actually surfing and will therefore have a lot more speed, momentum and force. Therefore your fins, fin boxes and board in general are in much more danger of serious damage.

So why have FCS developed a fin that can be popped out relatively easily from the back, but have little to no give with pressure applied from the front? Meaning if you collide with something moving forward the chances are you’re going to rip out your fin box and do some serious damage.

Futures surf fins on the other hand pivot around the tab at the back – so in theory if you were to ride into something at enough force the single screw would give out and the fin would then pivot around the back tab and slide out – minimising the potential damage to the box itself and therefore the board.

Effectively if you look at it, FCS2 fins are designed the wrong way around!

I know exactly what you’re thinking – hang on aren’t FCS2 surf fins super easy to take in and out?

Isn’t that the whole selling point and marketing focus of FCS2?

Well in theory, yes FCS2 should be easier. But in reality they’re not. Sometimes slotting in an FCS2 fin is smooth and easy, but 98% of the time they’re a bit of a pain in the ass, taking time to wiggle them to the front of the box to clip them in.

You’ve got to apply a good amount of pressure to pop them into place – and I’ve seen numerous people put pressure dings in the tail of their boards whilst doing it, or even slicing their hand!

And then there’s taking them out – which requires even more pressure, which surely this can’t be good for the long term integrity of the fin box?

Removing an FCS2 fin again gives you lots of opportunity to slice your hand (seriously make sure you use a towel for this!) and I’ve even dinged a board when a fin suddenly released, flipped forward and hit the bottom of the board!

In fact they’re such a pain in the ass to remove a whole fin removal tool was invented to help make the process easy – so now you can buy a tool to help with your tool-less fin system!

Since switching to Futures fins I’ve never once had an issue slotting them in or out – let alone damaging my board in the process! 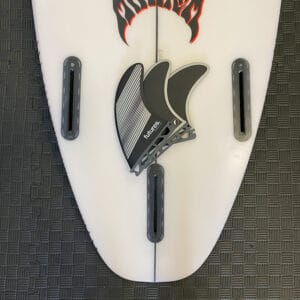 One thing you’ll quickly notice when shopping around for surfboard fins is that there are plenty of options for Futures fins – both from Futures themselves and plenty of other surf companies too, like Project Blank (which I’m currently riding in a few of my boards), Captain Fins and more

However, when it comes to FCS2 you’ve limited to buying FCS fins.

That’s because, along with the launch of the FCS2 system, FCS quickly got embroiled in a patent war with third party suppliers who began making fins. Without going into a heap of details and legal stuff initially the FCS2 system didn’t meet the criteria of a patent and then the appeal date lapsed.

But then FCS decided to tie up a couple of companies in legal battles, basically flexing their corporate muscle into scaring off other companies. And eventually it worked.

Futures fins on the other hand have kept their fin system open to third parties – meaning you have a better range of options and price point when shopping for Futures fins.

…and if you do want some new Futures Fins, grab 10% off your order at Project Blank using the code STOKEDFORTRAVEL!

5. Strength Of The Fin Box

The final part of why I swapped FCS2 for Futures fins is the overall strength of the fin box.

If you take a look at an FCS2 fin plug you notice the overlap on the lip of the box has just 1mm of glass at its thinnest points. A Futures box on the other hand is a standard 4.5mm all the way around.

Now which do you think will be stronger?

The other part to this is that these 1mm points sit at the very ends of the fin box – the part which arguable takes the brunt of the force during a collision, as well as the pressure when you’re inserting/removing fins.

I chatted to a buddy of mine in the ding repair business and he said that he certainly does a lot more repairs on blown out FCS2 fin boxes than Futures, and that when Futures come in they’re far less damaged and an easier, cleaner repair.

Next time you’re in a surf shop take a look at the second hand rack and the fin boxes on the boards with FCS2 surf fins – chances are a lot will have cracks/wear and tear on the back of the boxes.

So Why Is FCS So Big?

So lets get to the knitty gritty here – if Futures fins are so good, then why is FCS so big and why do 90% of the worlds top surfers on the CT ride FCS?

Well to give them their credit – FCS did invent the first removable fin system way back in 1994, so they were first to market, giving them a head start, initial patent to cash in on the invention and had a whole heap of fat cat cash behind them when a majority of the company was acquired by Macquaire Bank in 2002

What I’m trying to say here is that sometimes the best option isn’t the one with the corporate marketing machine behind it, or the cash reserves to put the likes of Fanning, Toldeo and numerous other big names on the payroll.

Heck even Kelly Slater was sponsored by them until they parted ways in 2012 and was arguably the name that took FCS to the height its at, having been with them since the early days.

Which surf fins are you riding?

Are you considering a swap with your next board?