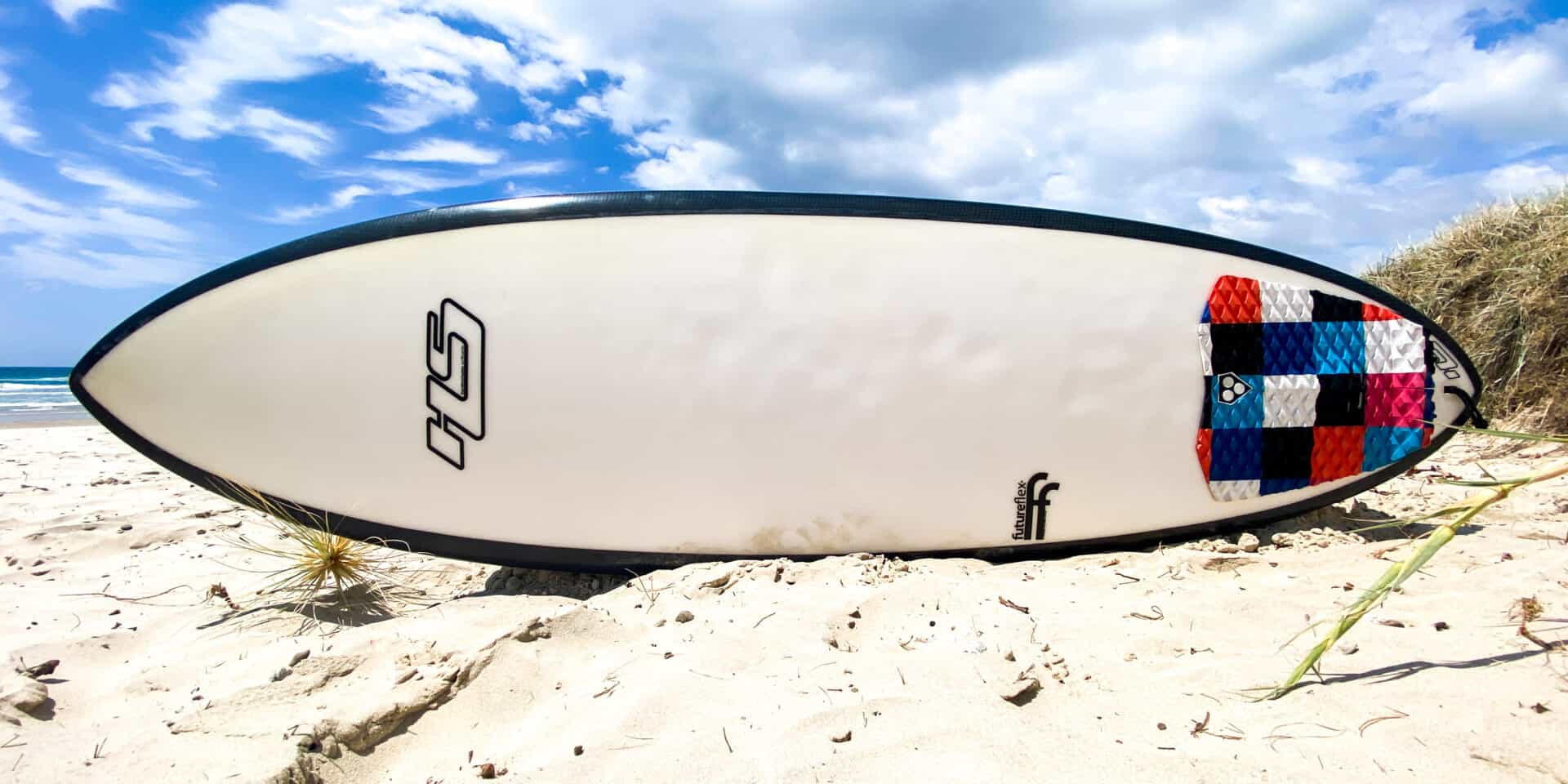 Is the Hypto Krypto worth the hype? What makes it so special? And is it actually that special? Here’s my full review + 4 other surfboards to consider!

The Hayden Shapes Hypto Krypto is one of the best selling surfboards of all time – but what makes it so special and is it really worth the hype?

Here’s my hands on review of the Hypto Krypto surfboard plus 4 alternative surfboards you should be looking at as well.

Oh, and if you do like the look of the Hypto Krypto, check out my review of the new Hypto Krypto Twin as well!

So what is the Haydenshapes Hypto Krypto?

Well the Hypto is one of the best selling surfboard models of all time and brought in the dawn of the high volume shortboard which worked in a huge variety of conditions.

Featuring a pretty flat rocker, with a slight flick in the nose, double V through the tail and a single to double concave running through the main part of the board it’s often referred to as the one board quiver (although admittedly I’ll contend that statement later on!) and can handle everything from 1 to 8 foot.

What Made It Such A Success

Arguably the Hypto Krypto was the first high volume shortboard that targeted the everyday surfer.

When it was launched over 5 years ago the surfboard industry was very firmly focused on high performance shortboard and the market wasn’t nearly as diverse as it is today.

The Hayden Shapes Hypto Krypto allowed the average joe surfer to get on a board much smaller than usual – the high volume helped ease the transition, whilst the drop in length gave the board a much more performance feel than this market was used to.

Easy to paddle, enough volume for the everyday surfer and advances in glassing technology all made the Hypto Krypto seem like the perfect board for all conditions.

Another key to its success was Hayden working relationship with style guru, surfer Craig Anderson.

Hayden got a Hypto Krypto under his feet in reeling 8 foot Mentawais barrels at Kandui and the result was they could spit out boards as fast as Anderson got spat out of that perfect tube!

Craigs continued performance on the Hypto Krypto and whole Hayden Shapes range has certainly been a key to the success of the Hypto for sure.

And alongside the timing of the Craig Anderson clip was the culmination of some really on point marketing by everyone involved.

They had the clips, they knew the angle, they had the perfect under catered for market and they went in all guns blazing with the perfect combination of marketing genius.

The final element of the perfect storm (as a good buddy of mine in the surf industry so eloquently put it) was the fact that Hayden had teamed up with Global Surf Industries for the launch of the Hypto Krypto.

The result was the board was available worldwide, in bulk, immediately as part of the launch. Although many companies had been using pop out surfboards made in various parts of Asia before, the Hypto Krypto is arguably the first board that really utilised the scale and speed of production to satisfy demand.

So Is It Actually Worth It?

So is the Hypto Krypto surfboard worth the hype and does it live up to everything it promised to deliver?

Well yes and no.

And yes you can surf this board in a huge range of conditions – from sloppy waist high beach breaks to pumping tropical reefs, as Craig Anderson so beautiful demonstrated.

The issues really come down down to the level of performance you’ll get, especially when it comes to smaller surf.

A friend who used the Hypto Krypto for a while when it was first released (and is certainly a much higher level of surfer than myself!) described the performance of the Hypto Krypto as 50% in small waves and 80% in pumping waves.

Yes, you can use this board in a wide range of conditions, but the compromise is that you can pretty much write off top to bottom surfing.

Watch Craig Anderson in the promo videos, he’s not really surfing it top to bottom at all, he’s dropping in on a high line, getting pitted and then being spat out!

Looks beautiful but for the surf conditions and performance of most peoples surfing game it’s not really the best showcase of what you can do!

That pulled in tail is certainly suited to hollow, high performance waves and barrel riding, but on your average surf beach it’s not going to be making the most of what you have to surf.

4 Alternative Boards To Check Out

Since the monumental success of the Hypto Krypto pretty much every board manufacturer on the planet now has a couple of high volume, performance shortboards in their range.

And many of these have built on the core features that made the Hypto such a groundbreaking surfboard, but have refined them and in many cases made even better options. 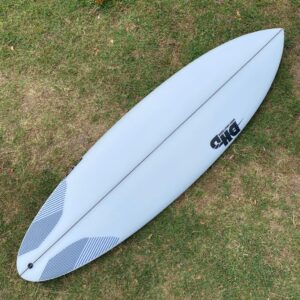 Out of the 3 boards in the list the Black Diamond by world renowned shaper Darren Handley (aka DHD) is perhaps the most similar.

The outline, rocker and concaves all bare a very uncanny resemblance to the Hypto – as they say imitation is the sincerest form of flattery – and the fact someone of DHDs calibre has taken notes shows a lot for the success of the Hypto.

The Black Diamond is certainly more refined though and you’re going to get a lot more performance and top to bottom surfing with it over the Hypto.

It also still offers both the 3 and 4 fin option too, so you can switch between quad or thruster depending on the conditions and of course your personal preference.

Alongside the refined shape and added performance you’ll also notice that the Black Diamond comes in a good chunk cheaper too – which is always a big bonus! 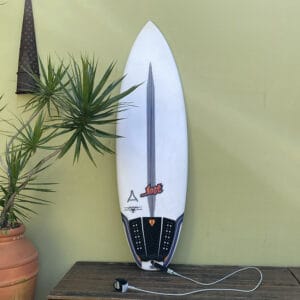 Out fo the 4 Hypto alternatives on the list, the Lost Puddle Jumper HP is my personal favourite and one of the main stay boards in my quiver.

Packing in a similar length to volume ratio as the Hypto Krypto the Puddle Jumper HP certainly feels much more lively under your feet than the Hypto and in smaller surf (up to head high) it certainly has better performance, plus that rounded squash tail will get your wave count up heaps too.

This board performs best in waist to head high waves and although you can ride it in bigger surf to be honest you’ll want to be reaching for something more performance orientated at that point anyway.

You can still switch between thruster or quad setup depending on what you like to surf but for me the thruster is the way forward with the HP. 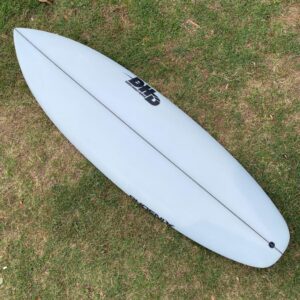 Another DHD to consider over the Hypto Krypto – the DHD Phoenix is the latest collaboration between DHD and Mick Fanning and is their new performance summer board.

Best ridden as a twinny with a trailer setup on small waves (up to around head high), it’s fast, fun and with plenty of volume. When it jacks up overhead chuck in your standard thruster setup and you’ll still have all the performance you want on bigger waves.

The option for either the thick or thin dimension in the even sizes also allows you to tailor the board a bit more to your style as well – opt for a bit more length and volume to really put the foam under your feet or thin is out for more performance.

Alongside the Puddle Jumper this is my other favourite in the list of alternatives and if you’re an intermediate or advanced surfer this will certainly tick all the boxes – in fact it’s my go to surfboard at the moment! 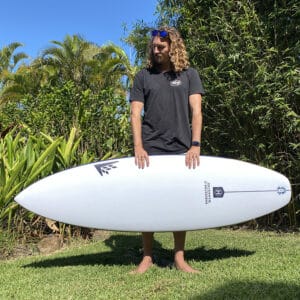 The 2020 revamp of the popular Dominator – the Firewire Dominator 2 has an updated design (including a new squash tail) and come sin Helium 2 tech, making it incredibly strong and lightweight.

Performing best in either a quad or twinny with trailer setup, the Dominator 2 can truly handle a huge range of wave conditions – from waist high to nearly double overhead and packs some serious punch in both the top to bottom surfing and also aerial game.

With slightly less volume than the Hypto you’ll need to ride it slightly longer to get the extra foam underneath you (my 6’1 packs in 36 litres) but the trade off is extra paddle power and heaps more performance.

It certainly matches the Hypto like for like in terms of the sheer range of waves it can be surfed in, but is certainly a more performance orientated board and you could find it replacing your go to shortboard!

Sure it’s not the cheapest option on the list (although comparable to a new Hypto) but it’s well worth the money and the Helium 2 construction makes it super light and really durable – perfect for the travelling surfer.

Ok, admittedly this article has come across as slightly anti Hypto Krypto but to give him his dues, Hayden and the Hypto team were onto an absolute winner when everything was launched and they’ve done a great job of making the board a worldwide success.

In fact so much so that the Hypto Krypto itself is arguably more famous than Hayden Shapes itself and is almost its own brand outright!

However, 5 years down the line there are certainly other alternatives available, with a few options for different styles and levels of surfer, that will help transition you to a smaller board, work in a variety of waves and retain better performance as a result.

There’s no denying that the Hypto Krypto was groundbreaking, but does it still hold up in 2020?

I’m going to throw it out there that if you take the time to look around there are better alternatives out there, and ones that are slightly easier on the wallet too! However the new Hyptp Krypto Twin Fin might be a good addition for a fun, twin fin board in your quiver!

Are you considering a Hypto Krypto or ridden one?

What’s drawing you to it?